He arrived in Florence in the summer of 1954. Fiorentina had bought him from Udinese together with Giuseppe Virgili. The attention of the sportsmen was all on the center forward; Virgili was better known and with a high transfer cost (75 million), but the important words of a Florentine by adoption weighed on the two Friulian athletes: Beppe Bigogno. The former viola, coach of the Friulians, had made them debut in Serie A and guaranteed for them: they were both ready for the big jump.

Orzan had been trained and had imposed himself as a side, the median who at the time of the system (WM) marked one of the two midfielders and was one of the sides of the midfield quadrilateral. 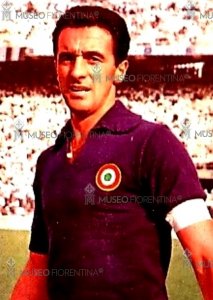 Alberto was born and raised in San Lorenzo di Mossa, a municipality that today is called San Lorenzo Isontino, where the ball was always at the feet of the boys. From the same country came Ivano Blason, eight years older than Alberto, one of the first and best interpreters of the role of free hitter: champion of Italy in 1952-53 and 1953-54 with Inter coached by Foni and then bulwark of the Padua of wonders coached by Nereo Rocco. It was written, in those years, that it was Blason himself who guided Orzan in his career.

Alberto, strong as an oak from the Collio, a hilly area on the border of Slovenia famous for its great wines, showed great technical skills associated with a remarkable vigor. These characteristics were accompanied by the speed of thought that allowed him to always be in the right place.

Fiorentina, at twenty-three, was a great opportunity, but also a big leap into the void. In the purple team the starting midfielder had already been completed: Chiappella… Rosetta… Sawn!

Would he be able to find a place on the team? In those days, the eleven players who entered the field were the same as those who left: there were no substitutions.

Fulvio Bernardini appreciated good players, but he appreciated them even more when they were humble, modest, generous. The purple coach was also an excellent tennis player and always drew a profound demarcation between the two sports: in tennis you play alone, in football alone you are nobody, everyone must be at the service of the team.

Already in the Swiss retreat of Bulle Orzan he won the trust of the coach and the starting shirt arrived immediately, on the first day of the championship, on 19 September 1954 in Fiorentina-Catania (2-1). In a season in which Segato played 32 games (out of 34), Rosetta 31 and Chiappella 29, Orzan played twenty-one games. Bernardini had chosen him, he had become one of his men. When there was someone to replace, who was not a striker, the solution was always the same: Alberto who knew how to destroy, but also to build. 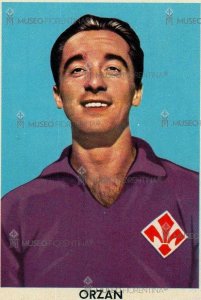 It was for this reason that the fans, and even some critics, began to see Orzan as Fulvio’s joker. The following year, with Julinho and Montuori, Fiorentina finally put their attack in place and were ready to dominate the championship, enchanting audiences all over Italy.

Alberto, in the first round, played a few games, but always ensured an excellent performance. On Wednesday 29 February 1956 Fiorentina played in Padua, in the recovery of the second return match day. It was a battle. The Viola won (1-0), but paid a heavy price: many injuries. Captain Rosetta, the centromedian around whom the entire defensive organization revolved, will remain out for the remaining fourteen league games. On Sunday the gigliati played at San Siro against Inter, the last obstacle to the Scudetto. Fiorentina won (3-1), showing the usual defensive solidity. Orzan was the solution found by Bernardini to replace Rosetta: in a year and a half of training the Friulian oak had learned to be perfectly in the center of the defense. His sense of position and ability to play head made him a very good central defender.

Alberto from midfielder to centromediano was the umpteenth intuition of Fulvio that led Fiorentina to dominate the championship (won with a twelve-point advantage over the second classified).

A few months later Alberto made his debut in the blue jersey: it happened on 11 November 1956 in Bern in Switzerland-Italy (1-1), in the national team there were five Fiorentina players.

In the following years Orzan was one of the protagonists of the team who: came in second place four consecutive times; lost the 1957 European Cup final in Madrid to Real; won the Grasshoppers Cup in 1957; he won the Friendship Cup in 1959 and 1960, the Cup of the Alps in 1961.

In 1960-61 there were only a few of the Scudetto squadron left. Beppone Chiappella had begun his transition from player to coach who kept him in Florence until December 1967, to return when his team needed to be saved. Montuori, Sarti and Orzan played at the start of the season, then Miguel suffered a head injury that forced him to interrupt his career too early. Sarti in the Cups gave way to Enrico Albertosi who was establishing himself and was more suited to playing in the spotlight. It was Orzan’s turn to lead, as protagonist and captain, the team that ended the 1960-61 season with the double victory of the Cup Winners’ Cup, the first UEFA event won by an Italian team, and the Coppa Italia (2-0 to Lazio, playing with an unusual yellow jersey). 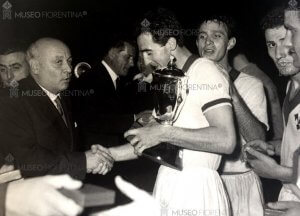 But it was not over yet for him or for Giuliano Sarti: in 1961-62 they were among the protagonists of a new exciting fight for the Scudetto. Seven days before the end of the season, the Viola were alone at the top of the table. Those who look at the final rankings and note the third place, do not realize how close that championship was …

The following year Ferruccio Valcareggi replaced Nandor Hidegkuti on the purple bench and Alberto found very little space in a team where Piero Gonfiantini had brilliantly taken the center of defense. Alberto made his reasoning and concluded that new marginal adventures were not for him by deciding to end his career where he had lived it: in Florence.

He himself, who in the first months spent in the city had difficulty understanding what these people were saying to him who ate a lot of words, had become a Florentine. 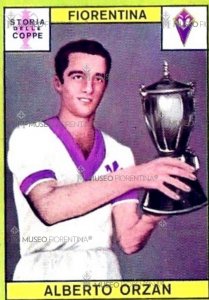 This is the reason why he entered the Viola Hall of Fame in 2013, players category

ALBERTO ORZAN, the dream of every sporting director, of every coach: the total player, the one who covers every role and always does it with humility, dedication, courage and a lot of reliability. Alberto Orzan is all this and he is also the Captain in the historic 1961 Cup Winners’ Cup victory, the first UEFA trophy to be won by an Italian team. In addition to the 1956 Scudetto, the 1957 Grasshoppers Cup and the 1961 Italian Cup, Orzan collects between 1954 and 1963, 246 viola appearances overall and 3 goals scored, four appearances in the senior national team.