“Tones and lightning”: the purple storm hits Serie A!

The lightning bolts, in this case, are represented by the goals of the gigantic bomber Luca: one of the symbols of the “Rinascimento Gigliato” 2005-2006 version.

But let’s go in order.

After the thriller-salvation conquered in the last, dramatic, championship match against Brescia (29 May 2005), the Fiorentina ownership decides to revolutionize the structure of the club with a multi-year project aimed at conquering the top floors of the standings.

To achieve this ambitious goal, the Della Valle brothers totally rely on two men in particular.

As Sporting Director, Pantaleo Corvino arrives in Florence: a manager famous in Italy for his evident ability to discover young talents, pay them at the right price and sell them at exorbitant prices.

Not for nothing, the Corvo boasts an enviable showcase of successes in the youth sector.

So, after a life spent in Puglia (between his Vernole, Casarano and Lecce), Pantaleo decides to land in the city of the lily to shape the purple planet in his own way.

As a first decision, Corvino entrusts the keys to the team to Cesare Prandelli.

Of the Orzinuovi coach, beyond a past marked by results and a good game (see the entries: Lecce, Venice, Verona and Parma), his recent choice to put his family in front of everything is particularly striking, including the football.

Due to the serious illness of his wife Manuela, Cesare had the courage to give up (just a few months earlier) a prestigious bench like that of Roma, just to stay by his side.

A noble and rare gesture for today’s world; let alone for a sport now suffocated by business and by the total lack of recognition and lack of affection of its protagonists towards the shirts they represent.

For Florence, therefore, it is an authentic privilege to be able to place their hope of rebirth in the hands of Prandelli and his tireless work team.

To begin with, the new lily duo opts for a profound renewal of the team: it starts with a goalkeeper and a strong center forward (Frey and Toni), to continue, then, with some elements of quality, experience and reliability (Fiore, Jorgensen, Ujfalusi and Brocchi above all); finally, there is the desire to enhance the young talents available (Gamberini, Pasqual, Pazzini and Bojinov).

Instead, as far as the many redundant players are concerned, Corvino’s fabric is decisive in easing the club’s cash outflows.

In short, the end result is a low cost and very tasty “purple cocktail”.

Fiorentina immediately showed that they had very clear ideas about the role to play this season: the ten points won in the first 4 days of the championship, combined with an already well-tested game and an enviable group compactness, have an incredible therapeutic effect on lily fans.

The mind, inevitably, runs to the time of the first (mythical) Trapattoni, when the formidable rocket start of the viola made us dream for several months of conquering the third tricolor.

A desire hidden in the innermost depths of every good Florentine.

A thought that our warriors foment in an extraordinary way in the period between the end of October and the final part of November, putting in the beauty of five consecutive victories!

Almost a year after the humiliating and 0-6 tennis match at San Siro, the Viola take a sumptuous and sweet revenge on the Rossoneri European runners-up with a historic performance subliminated by the brace of Luca Toni and the opportunism of Martin Jorgensen.

Yeah, Luca … you write Toni and you read Batistuta. 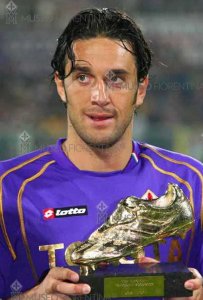 The 15 goals scored in the league in just 12 ligliate appearances (not counting the two summer goals in the Italian Cup) represent a formidable calling card to enter the world football elite; even more so, after the 50 goals scored in his two-year period in Palermo and the 10 million euros spent by the Della Valle brothers to win his performances.

Florence dreams big and has no intention of stopping, especially after having nailed Roma at the Olimpico on a precious 1-1.

The Viola marking, for a change, still sees the signature of Lucone, this time on a penalty.

Toni and Fiorentina 2005-2006: in a metaphorical sense, one could speak of a formidable driver for an almost perfect car.

The “almost”, unfortunately, is a must: not only for the utopia of perfection itself, but above all for a component “almost” unknown to us.

A factor that, on more than one occasion, has put a spoke in the wheel, effectively overturning our dreams into harsh reality.

December 4th 2005: the usual feverish “derby” against Juve is played at the Franchi.

The initial trailer of the match is enough to tell the trend of the entire film: while the Viola hit the crossbar with a header by Toni, the Bianconeri scored with Trezeguet.

All this after less than ten minutes of the game.

Fiorentina are not there and react with Ujfalusi’s “Czech anger”: his bomb from distance, however, hits the intersection of the posts.

On the third attempt, however, there is nothing for anyone: Pasqual’s cross and imperious detachment by the substitute Pazzini for the well-deserved draw.

For a moment, one has the impression of having bypassed the curse.

An illusion that disappears in the half hour of the second half: excellent lily action concluded by Toni with a sure shot right … the ball overtakes the Juventus goalkeeper Abbiati and, for a moment, makes all of Florence scream a miracle … on the trajectory towards eternal glory, however, the protagonist you do not expect emerges from the grass: a damned clod … deviation to the limits of the imperceptible and sphere, once again, on the pole.

Camoranesi’s mocking goal a few turns of the hand from the end is the simple, foolish consequence of the above.

Fiorentina and Toni, therefore, leave the field overwhelmed by applause but with morale in pieces: our dream scudetto, in fact, sadly returns to the cellar.

Nonetheless, the gigliato group has the concrete possibility of getting back on track immediately towards the conquest of another prestigious goal: namely access to the Champions League preliminaries.

The right opportunity comes six days after the tragic derby against the bianconeri: the newly promoted Treviso arrives in Florence.

A very affordable race on paper, but definitely not in practice.

In fact, Luca Toni himself is hypnotized in the first half by the Venetian goalkeeper Zancopè, having a penalty rejected by the latter.

Luck has it that, in the second half, Stefano Fiore finds the blessed opening to send the header of the lily victory to the net.

A very important success and made even more precious by the 5 points obtained in the following trio of matches against Empoli, Palermo (the only home match) and Reggina.

Three games that see, however, a heavy mole to the headlines: that is the persistent fasting of Toni in the goal zone.

It goes without saying that the situation must necessarily be unlocked as soon as possible, at the cost of using any amulet available.

A match that closes the first round and that, to be honest, should be played at Artemio Franchi.

Too bad, however, that the Sports Justice decided otherwise: the fault of the riots that took place during the last Fiorentina-Juventus of the Coppa Italia and the damage caused by some fans in the guest sector of the Empoli stadium.

And then everyone to Perugia: the promised land in which the dream of the Uefa Cup was built in the 1989-1990 season (due to the pre-Italy 1990 restructuring of our plant in Viale Fanti).

From Werder Bremen to Chievo Verona.

From Roby Baggio to Toni.

From Dunga to Brocchi.

After all, what do you want me to change?

15,000 Florentines therefore set out on a journey towards Umbria with a suitcase full of purple dreams in the Champions League format.

On the other hand, however, there is a Chievo who is now super tested and who really doesn’t want to know about playing the role of sparring partner.

To break through the yellow and blue wall, Cesare Prandelli immediately resorts to the imagination of the Chilean attacking midfielder Luis Jimenez, who has just been drawn from Ternana. The approach of the South American playmaker is proactive right from the start … quick exchange with the indefatigable Jorgensen … the Dane throws his eye in the middle of the Clivense penalty area and calibrates a perfect assist from the back … Toni sees, thanks and provides: flawless low shot with left foot and goodbye fasting … 1-0 for us and seventeenth seal in the league for “Lucone”.

All this just over 10 minutes from the interval.

It seems done, but it’s just an illusion.

Visiting coach Bepi Pillon took advantage of the interval to clarify the ideas to his group and shuffle the cards a little: the result is a team completely revitalized and ready to fight for every single playable ball.

His changes, then, are impeccable to say the least: while the Brazilian Luciano puts pressure on the left flank lily with fast lunges along the sideline of the field, Andrea Zanchetta crashes at the Curi party presenting himself at the entrance with a gift unwelcome.

In fact, the Gialloblù playmaker takes over halfway through the second half in place of Giunti and immediately takes charge of the punishment earned by his teammates on the edge of the purple penalty area …’unsurpassable Frey, seriously injured in Turin during the match in the first knockout round of the Italian Cup against Juve … Zanchetta, then, aims at the left corner of our Argentine goalkeeper Cejas and stabs him with a mocking kick: 1-1 to 70 ° and everything, damn it, to be redone.

Prandelli takes the blow and reacts as best he can, increasing the weight of the lily attack with the graft of the young Pazzini.

However, the psychological advantage acquired by Chievo seems to have provided the definitive extra gear for the Venetian team.

Consequently, it is precisely the clock that becomes, by the minute, the main enemy of purple hearts.

At a certain point, the question arises almost spontaneously among us fans: is it time to be satisfied?

A thought so widespread that it reached the ears of the unconvinced Toni in the middle of the “Cesarini Zone”.

The sacred fire of the Modenese bomber, then, burns the certainties of the opposing rearguard and indicates the tireless Pasqual the path of glory … in response, Manuel remotely sends a perfect cross from the left wing at sky height to dominate the flying mussi … Luca takes note, get on the lift and fly the ball in the head where no dream is really forbidden, not even the Champions League … Fiorentina-Chievo 2-1!

Toni joyfully observes the ecstasy of the many Florentines in tow and, as usual, offers them his hand rotated around his right ear as if to say: “Do you understand?”

No Luca, we didn’t understand anything, but that’s the beauty of being purple.