The last train to the A.

A phrase that resembles (at least vaguely) the title of a gripping thriller: one of those capable of nailing you on the sofa, making you jump for long stretches as a sign of empathy with the good protagonist of the film.

A face that, in this story, takes on the features of the ‘purest mustache in the world’.

Emiliano Mondonico, in fact, has never been a simple football coach for those who have Florence in their hearts.

In fact, despite having been born on the banks of the Adda river (to be precise in that of Rivolta) and in spite of a crowd that turns their attention to clubs that are as successful as they are not very romantic, his teenage choice to cheer for Fiorentina happily smells of courage and life.

It is no coincidence, therefore, that Mondonico landed on his very personal dream bench in one of the most delicate moments in our history: that of the post-bankruptcy of Cecchi Gori. 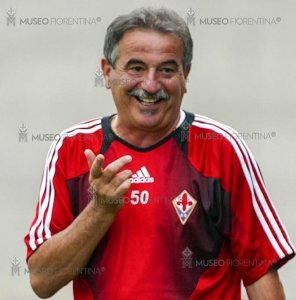 Season 2003-2004: due to repechage, the Viola find themselves playing the craziest Serie B championship ever, with 24 teams in play, five direct promotions and an additional play-off up for grabs for the magical planet A.

A tempting opportunity, or if you prefer unique, to return to fill the prestigious role that belongs to us.

An ambitious goal and, alas, very complex to achieve.

The good Alberto Cavasin knows something about it: our formidable technical guide in the hell of the C2.

The sudden formal transition between the cadets and a double transfer campaign carried out in a hurry determine, in the middle of the season, a situation that is not in line with the expectations of the fans and the economic efforts of the Della Valle brothers’ property: things that often happen in the chaotic lob world, obsessed with the logic of the result at any cost.

From the moving tears of the “new purple fan” Cavasin to the unstoppable smile of Mondonico, as a member of the legendary 7Bello (one of the first clubs born in Curva Fiesole)!

A “bread and salami coach” for a climb to the limits of the impossible: in February 2004, in fact, Fiorentina navigated to a ranking position closer to the fight in order not to be relegated than to the top areas.

The beginning of the adventure features two games within the friendly walls and four points won between Vicenza (1-1) and Albinoleffe (2-1): results that bode well in view of the delicate away match in Piacenza.

Too bad that the typical odyssey of the B series spills heavily even outside the pitch … a cursed and unexpected railway delay involves the arrival of the team in Emilia late at night; the consequences of this are inevitable: physical and mental fatigue, disappointing performance and a final 2-0 defeat as heavy as a boulder.

In short, a moral slap; the umpteenth of this troubled journey.

Unlike the previous episodes, however, the purple ultras decide to opt for the hard line: a cheering strike until a later date!

An angry initiative, of course, but also a desperate request for help from a team that still lacks a strong identity.

It is precisely here that the ‘Mago ​​Emiliano’ enters the field: no longer a simple coach, but an authentic bearer of light in a universe without stars.

The next midweek home round against Salernitana sees a small sign of recovery: bomber Christian Rigano ‘angry seal and 3 sweaty points in the deafening silence of the Franks.

A few days pass and the Viola hit Treviso again for a 0-0 which, in the eyes of most, sounds like yet another early surrender.

Just think of the post-match provocation of the Treviso coach Adriano Buffoni: ‘If Fiorentina are from Serie A, I’m Sant’Antonio!’

A statement that, in itself, would not be capable of causing any scandal, in the face of the turn taken by modern football.

The paradox of this, however, is inherent in the viola football faith!

Therefore, a pure “Florentine controversy” as destructive as it is good-natured, in the hope of being denied by return of post.

Friday 12 March 2004: a hot Fiorentina-Palermo is played at Artemio Franchi.

The pink and black team is now very much on the way to winning the cadet championship, and it could not be otherwise given the enormous potential of the Sicilian team.

The gigantic bomber from Emilia, moreover, has just entered the golden period of his career: he has now become literally unstoppable, it is enough to offer him even a single playable ball to turn an action into a goal.

Music for the ears of Eugenio Corini, director and jewel of Francesco Guidolin’s team: brushstroke in the lily area in the middle of the first half and a winning header from the Palermo ram.

A notable low blow for an already stunned group like ours.

The Curva Fiesole is full of viola hearts, but silence reigns as if in protest.

All that remains, therefore, is to entrust oneself to those who have made dignity their reason for living.

The half hour of play has just passed: Fiorentina earns a free-kick at the edge of the opposing area … the serve point would suggest a well-reasoned execution … the instinct and ferocious anger of Angelo Di Livio, however, they take over everything … the “lily soldier”, therefore, challenges the pink and black barrier by hitting the ball with all the strength he has in his body … Toni hits the ball again but, this time, inflates the friendly door : 1-1 and first time in the icebox.

The leaders reluctantly collects and returns to the green rectangle with a much more aggressive attitude.

Zauli, Corini, Grosso and the Filippini twins: one for all, all for Toni.

The pink and black bomber is a real nightmare for the lily defensive department: luck has it that Cejas, our Argentine goalkeeper, is graceful in the evening.

Mondonico, then, shuffles the cards and draws from the bench the most important purchase of January: the Greek striker Zisis Vryzas.

This, at least, is what the theory tells.

In practice, in fact, the former Perugia center forward is remembered above all for a winning hat-trick signed in Florence with the Umbrian shirt.

On that occasion, however, there was still talk of Serie A.

Here, however, we are one step away from losing it for who knows how long.

The 90th has already gone, and with it (perhaps) the great dream of revenge.

Our tireless right-back Christian Maggio sends the last playable ball into the Sicilian area … the pink and black goalkeeper (but with a viola heart) Berti miscalculates the exit time and awkwardly fiddles with the ball … Camorani dives with his head and sends the ball towards the unguarded goal … for a moment it seems done … the opposing defender Nastase, on the other hand, runs desperately backwards and tries to deflect the trajectory for a corner … the ball, however, is printed in full on the crosses and ends his run on Vryzas’ left foot … the 2-1, as if by magic, is purple! 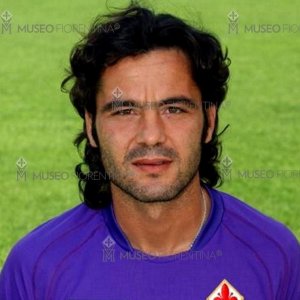 A genuine sonic earthquake happily erupts across the stadium and across the city for the most unexpected of victories.

Now Mondonico and his beloved Fiorentina can really begin to climb the Olympus of football: all this thanks to the providential intervention of a fantastic Greek meteor.