A phrase to sum up the magic and cruelty inherent in the Europe of football.

A more or less long series of endless journeys from one part of the continent to the other with the ambition of taking the name of your city beyond the national borders of Sunday.

Midweek nights in which the stadium lights light up the most hidden dreams of passionate fans, underlining the great beauty of “our”, romantic, game.

A context where the heart matters exactly as much as the legs and the mind.

Woe to letting yourself go too far with the logic of calculation.

In fact, in the cups, an episode, a mistake, a feat or a goal is enough to smash a year’s work or exalt it to the point of making it divine.

An assumption that undoubtedly rewards the courage of those who marry an idea of ​​football devoted to entertainment.

In this sense, Vincenzo Montella’s Fiorentina represents an excellent model to follow for those who decide to take the path of beauty without delay.

A team born in Moena (home to numerous purple summer retreats) from the rubble of the “partridges”: the symbol of a group not very inclined to discipline and sporting results, at least as regards the two-year football period 2010-2012.

Partridges which, according to various chronicles and legends, were first embalmed and then stolen by the players, at the end of a collective dinner marked by the lack of education and relative shame on the part of the lily society.

Reasons enough to push the Della Valle brothers to implement a football revolution with few equals in Italy for quality and time of realization: a Spanish tiki taka in purple sauce aimed at the seizure of the ball and total domination of the opponents.

First in Serie A, and then in the Europa League.

An unforgettable three-year cycle worthy of an absolute prominence in the history of our magical club.

Now, however, it is time to focus on the final part of this “marvelous trilogy”: that is, the Europa League version 2014-2015.

A competition full of epochal courses and appeals, especially in reference to the 1989-1990 Uefa Cup.

A trophy, moreover, changed in the name but not in the main opponents.

Let’s get our teeth out immediately and let’s start with the usual sore point: Juventus.

The most cumbersome obstacle between Florence and Gloria, in Italy and in Europe: a tricolor wound before (1982), and a continental triumph denied after (1990).

In the latter case, however, one could easily speak of a success and a half.

The reference, not too veiled, is to the 2013-2014 Europa League, conquered with a magnificent fourth place in the league: a position that, to date, would be equivalent to direct access to the Champions League groups.

However, the prospect of being able to play an important role in the so-called “lesser Europe” was not, after all, such a bad prospect.

The biggest suggestion of that cup?

Without doubt the venue of the final: Turin, Juventus Stadium!

What could be more exciting than the thought of lifting a European trophy in the home of the usual enemy?

A reflection that, probably, must also have passed into the heads of the Juventus players: otherwise, their sensational “relegation” from the Champions League at the hands of the far from irresistible Galatasaray would not be explained.

If we add to all this, then, a Uefa draw on the verge of mockery, the result is nothing short of obvious: “Italian derby” in the round of 16 of the competition.

The first battle was played on March 13, 2014 in Piedmont: Vidal’s Juventus advantage almost cold and Mario Gomez’s fantastic purple response about ten minutes from the gong.

A week later, however, the illusion vanishes in the worst possible way: “cursed” punishment (in every sense) by Pirlo and goodbye to the Cup.

The fact that Benfica subsequently avenge the lilies, eliminating Juve in the semifinals, certainly does not help to diminish our regrets.

To make a serious remedy, it is therefore necessary to make up for interest immediately, in light of the fourth place repeated by Fiorentina at the end of the championship. 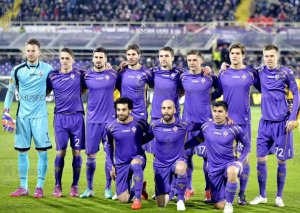 The 2014-2015 Europa League (along the lines of the previous edition) presents itself with a fairly affordable group stage and a continuation of goosebumps.

The opponents of the mini-group?

The French from Guingamp, the Greeks from Paok Thessaloniki and the Belarusians from Dinamo Minsk.

Four total wins (three of which away!), One draw and one painless defeat.

Practice filed, forward the next.

In fact, the draw for the round of 32 offers us the battleship Tottenham.

In spite of the enormous strength of the Londoners, the Florentines invade England en masse in the first leg, pushing Montella’s men to conquer a precious 1-1 (purple goal from Basanta); The result, then, materialized in the return match in Florence with an authentic football lesson against Pochettino: the sublime 2-0 final is signed by the pearls of Mario Gomez and Mohammed Salah.

Thus, as in the past season, we move on to another all-Italian eighth final.

This time, however, Juve is not involved, but Rudi Garcia’s Rome.

The first leg at the Franchi ends with an annoying 1-1 in qualification key: unfortunately the expert Keita responds to our advantage of Ilicic.

However, no fan is yet aware of the forecast forecast for the return match at the Olympic stadium where (luckily for us) an overwhelming ‘Hurricane Gigliato’ strikes: first Gonzalo Rodriguez on a penalty kick … then Marcos Alonso … finally, José Maria Basanta … three Viola goals in just twenty-two minutes of play and the Giallorossi tumble under the eyes of the incredulous paying public.

If Rome cries, Florence enjoys: we are in the quarterfinals of the Europa League!

To be precise, in the direction of Ukraine.

The country where the “Divin Codino” Roberto Baggio discovered himself as a skating champion.

Round of 16 of the 1989-1990 Uefa Cup: Fiorentina face Colonel Lobanovskij’s Dynamo Kiev; a formidable concentration of stars belonging to the former USSR.

Nothing comparable, however, to our “Viola Luce”: 0-0 final on the frozen field and passage to the next round obtained by virtue of the 1-0 achieved in Perugia thanks to a penalty from the usual Robertino.

Legends that will continue to be handed down from father to son, obviously Florentine!

Now, however, there is another one to write, possibly more beautiful.

Thursday 16 April 2015: after a quarter of a century, Fiorentina returns to Kiev to play the first leg of the quarter-finals of the Europa League against the legendary Dinamo. 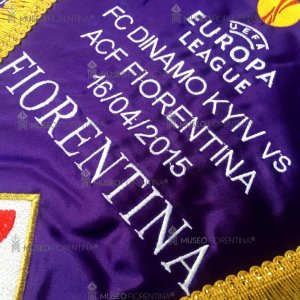 The leitmotiv of the match is clear from the beginning: on the one hand the physical overwhelming power of the Ukrainian giants, on the other the superb class of the orchestra gigliata.

The symphony produced on the lawn by our ‘musicians’ is so harmonious that it drowns the whistles of the sixty thousand and more supporters of Rebrov’s training.

However, there is something terribly out of place; in fact, the enormous amount of play produced by the various Borja Valero, Mati Fernandez and Milan Badelj is not capitalized in the best way by our offensive department; things that can happen, unfortunately, when the use of the saber foil is preferred.

Mario Gomez, then, seems to have stumbled upon the classic “bad day” sills, and it is not even the first time since wearing our shirt.

We might as well leave the former Bayern Munich the task of dealing with the opponents; the intent is to create the right spaces to cut the home defense in two through the lethal percussion of Joaquin and Salah.

The Egyptian, as an authentic loose cannon, sows several times the panic between the lines and even goes very close to scoring with a “strangled right” that is neutralized by the forty-year-old goalkeeper Shovkovskiy.

An opportunity to add to the many opportunities built by Fiorentina during the first half: from Joaquin’s successful shot, “blocked” by an opposing defender, to the beautiful right-footed shot by Mati Fernandez, who finished at the edge of the post.

I almost forgot: there would also be a sensational “smooth” by Mario Gomez a few steps from glory.

In a nutshell: an authentic, but sterile, purple domain.

The opposite of the Ukrainian team, ruthless as never before: Lens hit from the edge of our area, a decisive deviation by Tomovic and Neto displaced.

Without really knowing how, we find ourselves at a disadvantage about ten minutes from the interval.

A tremendous blow to a group now accustomed to the joke.

Pure lifeblood, however, for a Dynamo Kiev short of ideas but plenty of energy.

The seconds run quickly along with the sweat on the forehead.

The Spanish tenacity of the purple home produces an almost cathartic jolt about a dozen minutes from the end: Borja Valero finds the right hole to cut Rebrov’s defensive line and put things back in place … Marcos Alonso observes the movement of his partner and brush a cross to the kiss from the left wing … Borja hits the ball with his head and leaves Shovkovskij of stone … pole!

A wood that smells of almost definitive surrender.

Montella collects, does not give up and immediately opts for two changes: outside Borja Valero and Mario Gomez, inside Aquilani and Babacar.

The entry of the Senegalese, among other things, vaguely recalls the superstition typical of every coach.

In the previous January, in fact, Khouma himself was the protagonist of a very important goal against Chievo: a goal in the Cesarini area that allowed Fiorentina to conquer the Bentegodi stadium for 2-1, effectively relaunching their ambitions in Italy and in Europe.

Now, after three months and almost two thousand kilometers (those that separate Verona from Kiev), a new miracle is needed.

We are in full recovery: throw in the Ukrainian half of the pitch … Tomovic’s hands direct the ball to the feet of the tireless Mati Fernandez … the Portuguese tames the ball, drags it towards the back and strokes a cross towards the center of the area … Babacar jumps into the sky and mistakenly deflects the sphere upwards, due to Aquilani’s cumbersome presence … it seems over, but it’s not so … Baba, positioned with his back to Shovkovskij, decides to dust off the famous “Florentine Genius” in a flash : flying twist with the body and the ball overturned towards the goal for the most impossible of goals… Dynamo Kiev-Fiorentina 1-1! 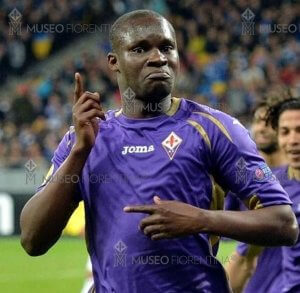 “San Khouma”, then, runs quickly towards the guest sector to share his happiness with the few, heroic, lily fans who have arrived in Ukraine.

Vincenzo Montella, on the other hand, just clenches his fist tightly, being aware that there will still be fighting the following week, on the occasion of the second leg.

A challenge in which Mario Gomez (again “Super”) and Juan Manuel Vargas (explosive missile under the Fiesole) complete Babacar’s feat in the best possible way, dragging Fiorentina to the Europa League semifinal!

A dream that, unfortunately, will be shattered at its best by Unai Emery’s strong and multi-titled Sevilla.

However, nothing and no one can ever cancel the emotion of that fantastic and unexpected “paw” in the cold Kiev night.

On the other hand, Giorgio Faletti teaches: “The important thing is not what you find at the end of a race, but what you feel while running”.

That’s why we want to scream once again: thank you ‘Viola Panther’!