Almost all the stars of world football have played at the stadium in Florence, the current Artemio Franchi, formerly called Comunale and before that Giovanni Berta. Some of these champions wore the Fiorentina shirt, others were Fiorentina’s opponents in the Italian league or in the Italian Cup, or in official or friendly matches at an international level. Still others have been in Florence with their respective national teams in matches against the Italian one. Some, then, performed at the stadium in Florence during the world championships of 1934 and 1990 and during the European championships of 1968, organized by Italy (no competition of the 1980 Europeans in Italy was, however, played at Comunale). I was lucky enough to see several of these world football champions live, including Diego Armando Maradona. Below I will recall the last match in which he performed at the Stadio Comunale in Florence. It was June 30, 1990. 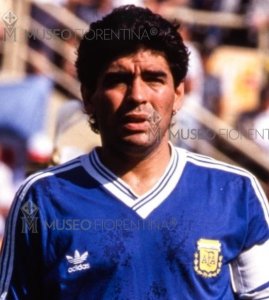 He won an Argentine Metropolitan championship with Boca Juniors in 1981, with Barcelona in 1983 a La Liga Cup and a Spanish Super Cup and in 1982-83 a Spanish Cup, with Napoli two Italian championships in 1986-87 and in 1989-90 , a UEFA Cup in 1988-89, a Coppa Italia in 1986-87 and an Italian Super Cup in 1990. He won the title of top scorer in the Italian championship in 1986-87. With the Argentine national team he won the World Championship in 1986 as captain. He never won the Golden Ball because until 1994 the prize was awarded only to European players. He was awarded the Golden Ball for Lifetime Achievement in 1995.

For the second time on Saturday 30 June 1990 the stadium in Florence hosts a match in the quarter-finals of the world championship. It already happened in 1934. On May 31st Vittorio Pozzo’s Italy and Spain faced each other. And since after regular and extra time the result was always a draw (1-1) and no penalties were foreseen, the match was replayed the following day again at the Stadio Comunale in Florence, then named after Giovanni Berta.

On 1 June the Azzurri won 1-0 with a goal from Meazza and flew to the semifinals (they would later become world champions). I bought the ticket in the Fiesole curve for the quarter-final match (and also for the other matches played in Florence, i.e. those of the qualifying group which also included Italy: Czechoslovakia-United States 5-1, Czechoslovakia- Austria 1-0 and Austria-United States 2-1) a year earlier, in 1989 (in a banking institution) at a total price of 180,000 lire (40,000 lire the tickets for the qualifying rounds cost, 60,000 lire the one for the quarter-final, or the equivalent of 30 euros; in the Fiesole curve the ticket for Fiorentina-Milan on 20 November 2021 costs 20 euros, 10 less than the quarter-final match of 31 years ago).

I am thrilled by the idea of ​​witnessing such an important meeting live. The draw involved Diego Armando Maradona’s world champions from Argentina who in the round of 16 sent home the Brazil of Sebastiao Lazaroni, future Fiorentina coach, beating them 1-0 with a goal from Caniggia and Yugoslavia who in the round of 16 eliminated Spain, beating them 2-1 thanks to a brace from Stojkovic. Among other things, whoever wins this race will face Italy if Vicini’s team beats Eire. The starting time of the meeting of the Communal of Florence is scheduled for 5 pm. It is a very hot day. In the shade there are forty degrees. Near the crossing stadium Oscar Alberto Dertycia, the Argentine center forward of Fiorentina, injured a few months before the end of the championship in which he scored four goals. He came to cheer for selection. I too cheer for Argentina, the national team of Daniel Bertoni and Daniel Passarella, both world champions in 1978 and then Fiorentina players in the Eighties, after the reopening of the borders (which remained closed to foreign players, coming from foreign federations since 1966, after the elimination of Italy at the World Cup in England by North Korea, to 1980). I have always had a soft spot for the South American national teams and, in particular, for Brazil and Argentina. I arrive inside the stadium half an hour before the start of the match. My place is in a corner at the top of the Fiesole curve. The heat is unbearable. In the sun, where I am, the temperature is close to fifty degrees. Playing in these conditions is not easy. At the stadium the support is, in the great majority, for Yugoslavia. Thousands of them arrived, mostly by car. Few are cheering for Argentina, including many supporters of Napoli, who have just won the Scudetto, with the flags of the Neapolitan team and the shirts with the photo of the pibe de oro in the blue jersey. 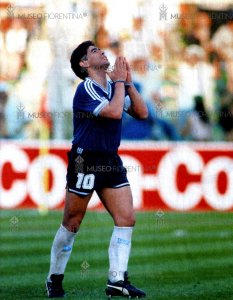 The game begins at a very low pace. The show is hiding. Maradona plays and does normal things. Yugoslavia seems to be more on the ball. But at half an hour there is what appears to be the turning point of the match. In fact, the Yugoslav defender Sabanadzovic, Maradona’s controller, was sent off for a double yellow card. The second foul – a trip against Diego – seems venial. Argentina, with the extra man, tries to take advantage of it. But Maradona, taken into custody by Brnovic, is not in the day. And then he is constantly booed by the Yugoslav fans who rightly fear him, but also by many apparently neutral fans (there are several from Tuscany too). The most dangerous for Argentina is the defender Ruggeri who, on two occasions, comes close to the net. Then Burruchaga also tries. But goalkeeper Ivkovic saves well. Yugoslavia, in turn, becomes dangerous with Savicevic, who entered the field after just over an hour. The race is bad. It does not give emotions. The result does not unlock from 0-0. We go to extra time. And in the 119th minute Argentina scored with Burruchaga but the goal was canceled due to a hand ball.

And Maradona? I’ve seen him play live several times and this seems like his worst game to me. Will it be the heat? Or maybe the tension? The fact is that Diego disappoints. In the end he only shoots on goal three times, without, however, ever making himself really dangerous. He also provides three inviting balloons to his teammates who, however, do not exploit them adequately. The Argentina captain does not move much and this is demonstrated by the fact that in one hundred and twenty minutes he suffers just six fouls, one every twenty minutes. Really few for him. The result is not unlocked from the initial 0-0. This leads to the penalty kicks that are beaten in the goal under the Fiesole curve. I’m happy with it, because at least I have the opportunity to see them up close. After one hundred and twenty minutes of play certainly not exciting, I hope that the emotions come at least in the shots from the spot. He starts beating Argentina and Serrizuela is not wrong. Then he goes to kick Savicevic and his conclusion is printed on the crossbar. Burruchaga scores the second penalty for the South Americans. Then Prosinecki scores for Yugoslavia and shortens the distance. Maradona appears on the disk. The whistles are wasted. The Yugoslav supporters thus hope to deconcentrate him. For my part, I hope that Diego does not betray. Instead it is not like that. His left-footed shot, not too angled, is weak. Yugoslavian goalkeeper Ivkovic even blocks the ball. The majority of the stadium cheers. Maradona sadly starts towards the midfield, where his teammates are. His head is down and he can hardly hold back his anger. He fears that his mistake could be fatal for Argentina. His fans, few to tell the truth, try to console him with the usual chorus: Diego, Diego.

But, after his mistake, Yugoslavia draws with Savicevic. The score is now 2-2 and the two teams still have to take two penalties each. Troglio shows up on the spot but the conclusion ends on the post. Then it’s up to Brnovic. His shot, however, was saved by Goigochea. The fifth penalty from Argentina goes to kick Dezotti. The Cremonese center forward scores and brings Maradona’s team back to the lead. Hadzibegic now goes to the spot. If he scores he goes to the bitter end. And, instead, Goigochea also saves this penalty. Argentina thus wins 3-2 and therefore flies to the semifinals where they will meet the winner of Italy-Eire who will face the Olimpico after more than an hour. 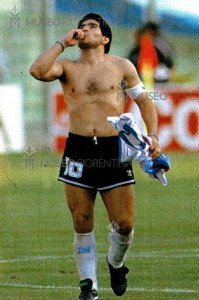 Maradona is among the first to run to embrace Goigochea who with his parades has kept Argentina on its feet. Now Diego is happy as a child. Joy can be read on his tired and sweaty face. His mistake from the spot was not decisive and he is happy with it. The public of the Communal still whistles Argentina and applauds the players of Yugoslavia who in ten for an hour and a half have stood up to the world champions. I leave the stadium physically destroyed by the asphyxiating heat and almost dehydrated. I imagine the fatigue experienced by the players to play such an important match in really difficult weather conditions. As I walk home, surrounded by the sad faces of the many Yugoslav fans, I don’t imagine that this would have been the last time I would have seen Diego Armando Maradona, one of the greatest players in football history, live.