Almost all the stars of world football have played at the stadium in Florence, the current Artemio Franchi, formerly called Comunale and before that Giovanni Berta. Some of these champions wore the Fiorentina shirt, others were Fiorentina’s opponents in the Italian league or in the Italian Cup, or in official or friendly matches at an international level. Still others have been in Florence with their respective national teams in matches against the Italian one. Some, then, performed at the stadium in Florence during the world championships of 1934 and 1990 and during the European championships of 1968, organized by Italy (no competition of the 1980 Europeans in Italy was played at the Comunale).

I was lucky enough to see several of these world football champions live, including Leo Messi. 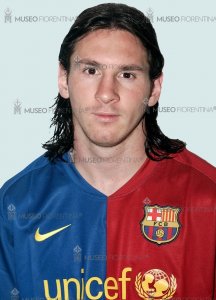 Lionel Andrès Messi Cuccittini, for everyone simply Leo Messi, was born in Rosario, Argentina, on June 24, 1987. His career began in the cantera of Barcelona, ​​a club in which he then played until the entire 2020/21 season before moving to Paris Saint Germain.

Messi is a forward, gifted with extraordinary dribbling and great vision of the game. It is capable of millimeter throws even from long distances. And then he has a strong and precise shot. Very good at free kicks and penalty kicks. For the most part, he loves starting from the right wing to concentrate and start his conclusions. But carousel also in a central position or on the left. Whichever part of the pitch he moves, he who is a natural left-handed, still manages to score or provide assists for his teammates.

Messi plays in Florence only once (there will be no friendly match played at Franchi on 2 August 2015, won by the Viola against the Blaugrana 2-1 with a brace from Bernardeschi). On Wednesday 30 July 2008, the Argentine champion, just twenty-one, is the absolute protagonist of the match between Fiorentina and Barcelona. The match is valid for the Artemio Franchi Memorial, the greatest manager in the history of Italian football. 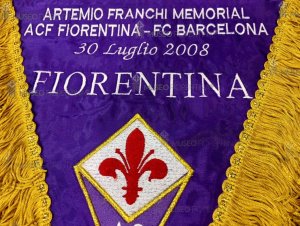 Florentine by birth and former secretary also of Fiorentina in the 1950s, but also in love with Siena (the stadiums of Florence and Siena are named after him) Artemio Franchi died on 12 August 1983 in a road accident between Taverne d ‘Arbia and Asciano, while he goes to contact a jockey for his district, the Tower, a few days from the Palio dell’Assunta scheduled four days later. I am very excited, when I arrive in the press box well in advance of the start of the match, from the idea of ​​seeing one of the best footballers in the world at work. Leo Messi, despite his young age (21 years), has already shown that he has the talent of the greats, and I am curious to see him live. At the Franchi there is the public for great occasions, despite the summer period with Florence already half-empty.There are forty-three thousand spectators in the stands. Really many. It is an important test for Fiorentina and Barcelona, ​​both expected shortly after the Champions League preliminaries. It is also the night of the premiere in Florence among others by Alberto Gilardino, the center forward bought by Milan. And there is also curiosity to see the young talent from Belgrade’s Partizan, Stefan Jovetic, at work.

There are forty-three thousand spectators in the stands. Really many. It is an important test for Fiorentina and Barcelona, ​​both expected shortly after the Champions League preliminaries. It is also the night of the premiere in Florence among others by Alberto Gilardino, the center forward bought by Milan. And there is also curiosity to see the young talent from Belgrade’s Partizan, Stefan Jovetic, at work.

The eyes of the Viola fans and mine are all focused not only on Fiorentina players but also on Messi, who will leave Barcelona in a few hours to participate in the Beijing Olympics with the Argentine national team. The Barca starts in a great way. Tourè immediately engages Frey and then Xavi, with a round shot, hits the intersection of the posts. It is evident that Pepp Guardiola’s team is further ahead in their preparation. The purples appear packed. But this is summer football. Halfway through the first half, Messi takes the stage. One of his shots is barely blocked by Frey. Then Kroldrup is forced to a foul on the edge of the area on him, as he is launched towards the purple goal. 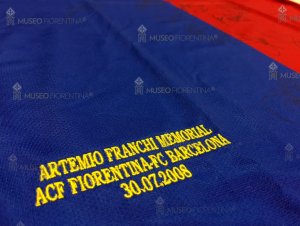 Messi is irrepressible and in the 29th minute starts the action of the Barcelona goal. From a right wing position he puts an inviting ball on the far post for Piquè. The Catalan defender tows him from the chest and provides an assist to the kiss for full-back Puyol (replaced at the start of the second half by Martin Caceres, future player of Fiorentina) who scores the goal of the Blaugrana advantage. Franchi applauds openly. People are peeling their hands. Such beautiful goals after such beautiful actions are seen very few. They are football gourmets. Shortly thereafter Frey is still on top with a nice save on a shot from Keita. We go to the interval with Barcelona deservedly a 1-0 lead thanks to a super Messi. However, if Fiorentina are still in the game, the merit is above all of their goalkeeper, by far the best of the Viola. In the second half, after two minutes, Barca scores again with a diagonal shot from Jeffren, who took over from the injured Iniesta at the end of the first half. At 11 ‘Prandelli revolutionizes Fiorentina, making five substitutions (half of the players on the move) and changing form. Enter Papa Waigo, Gobbi, Jovetic, Osvaldo and Pazzini respectively in place of Zauri, Pasqual, Donadel, Gilardino (still out of condition like many of his companions) and Mutu. From 4-3-3 the purple coach goes to an unscrupulous 4-2-4 with the winger Papa Waigo who goes to make the right-back. The pace of the match drops compared to the first half.The evening is hot and muggy and it is not easy to play in these climatic conditions. Fiorentina, despite the new additions, fails to make themselves dangerous, and Barcelona no longer sinks. At 23 ‘Messi comes out replaced by Hleb. For him there is an authentic standing ovation. The forty-three thousand of the Franks are all standing to applaud him. In sixty-nine minutes (including sixty seconds of injury time at the end of the first half) the Argentine champion gave those who had the privilege of going to the stadium a great football with the plays of an authentic champion. A minute after Messi’s exit, another Argentine who wears the purple jersey, or Osvaldo steals the ball in midfield and throws Pazzini vertically. The “Pazzo” controls the ball and beats the Catalan goalkeeper Valdez with a precise low shot. The game would seem to reopen but it is not. At 27 ‘Barca drops the trio. Bojan, who entered at the beginning of the second half in place of Pedro, overtook four Viola players and with a diagonal shot beat Storari, who took the place of Frey a minute ago. Fiorentina tries to react but never becomes dangerous. However, the eighteen year old Jovetic, on Messi’s evening, shows a couple of plays of excellent technical level. 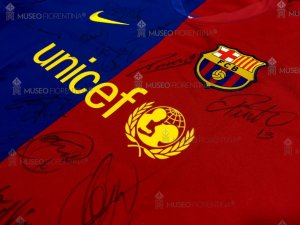 The result did not change and Barcelona won the first Memorial Franchi, winning 3-1. At the end there are deserved applause for everyone. When I leave the stadium I am satisfied to have seen Messi at work who will win the Champions League with Barcelona that season, beating Manchester United 2-0 in the final in Rome (the Argentine champion will score the second goal).

Fiorentina played their part against a far superior opponent. I’m not worried about the many criticisms I hear, returning home along the Viale dei Mille, from fans disappointed with the result and convinced that Prandelli has made a mistake in the preparation. I am sure that the viola coach has worked to bring the team in optimal conditions for the Champions League match, and that’s right. Prandelli, in fact, the game only served to fine-tune the formation (with only three changes, namely Gobbi, Dainelli and Vargas instead of Pasqual, Gamberini and Donadel respectively) which thirteen days later (12 August) will play at Franks against Slavia Prague. That evening Fiorentina will win the first leg of the Champions League preliminaries 2-0 with goals from Mutu and Gilardino and with 0-0 in the second leg they will gain access to the group stage.