Almost all the stars of world football have played at the stadium in Florence, the current “Artemio Franchi”, first called “Comunale” and before that “Giovanni Berta”.

I was lucky enough to see several of these world football champions live, including the one who was unanimously considered the best of all in the late 1950s and early 1970s, namely Pele. 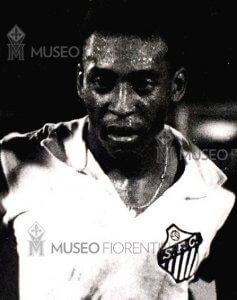 Pelè, pseudonym of Edson Arantes do Nascimento born in Tres Coracoes in Brazil on 23 October 1940 was the only footballer in the world to have won three editions of the world championship, in 1958 in Sweden when he was not yet 18 years old, in 1962 in Chile and 1970 in Mexico. FIFA acknowledged his career record of 1283 goals, while in official matches he has scored 757 goals in 816 matches with a scoring average of 0.93 goals per game.

Pelè wore the number ten shirt. He was however a pure striker. He played with both feet and had a strong and accurate shot. He was also skilled in aerial play, despite not being particularly tall. His header against Italy (1-0) in the 1970 World Cup final in Mexico City, won by Brazil 4-1, was the most striking example. His elevation in the circumstance was truly extraordinary.

Pelè has only played in two club teams, Santos (from 1956/57 to 1973/74 when he decided to retire) and the Cosmos of New York, a club he joined in 1975, after a sabbatical, and in which he ended his career in 1977. When he played for Santos he was requested by many European teams, but at least he didn’t succumb to the billionaire temptations of other clubs.

Fiorentina had also tried to buy it. There had been a negotiation at the beginning of 1962. The “Corriere dello Sport” of March 3 of that year reported the news of an attempt by the purple club to secure Pele’s performances with the mediation of Julinho, the Brazilian champion who won the Scudetto with Fiorentina in the 1955-56 season.

In Florence, on the other hand, the striker Almir, nicknamed the white Pelè, also Brazilian, arrived in the summer of 1962. He never settled down and only played the second half of the first round of the Italian Cup in Rome with Lazio on 9 September of that year. Fiorentina won 3-0 with goals from Dell’Angelo, Canella and Petris. Almir gave Petris the assist for the 3-0 goal, then, in the repair market in October, it was sold to Genoa.

Pelè plays in Florence on Tuesday 27 June 1967 at night. It is the first match of the Coppa Città di Roma tournament, in which Santos, Fiorentina and Roma participate. 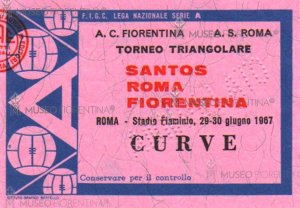 Ticket of Tournament with Santos, Roma and Fiorentina

This is the last match in the purple jersey in Florence of Kurt Hamrin, the captain (but nobody knows it yet), before his transfer to Milan. Hamrin and Pele, among other things, met in Stockholm on 29 June 1958 in the final of the world championship won by Brazil over Sweden 5-2, during which the number ten carioca scored a brace.

When I enter the Municipal Stadium of Florence, together with my dad, after having climbed the spiral stairs of the Maratona, the glance that presents itself to me is fantastic. The stands are almost all full. The paying spectators were at the end 40.200 for a collection of thirty-four and a half million lire. My heart is beating fast that June evening. I am thrilled to see the great Pele live for the first time. I am thirteen years old and for us children, Fiorentina fans, as well as the viola players – the best of all always and in any case – our legend is the number ten of Santos and Brazil, even if we have seen him, however rarely, even in television.

In those years when in Italy there are barely two television channels, strictly in black and white, very few games are broadcast on TV, but I knew everything about Pele. I read his exploits on “Il Calcio e il Ciclismo Illustrato” (closed in 1966 and again on newsstands from 1970 to 1973) and on “Sport Illustrato” (it ceases to publish in that year), two prestigious sports weeklies of the time, and then in “La Gazzetta dello Sport” and in “Stadio”, still printed with green pages.

In short, I had been dreaming of an evening like this for some time. And that June 27 fifty-four years ago, football-wise speaking, was, together with the days of Fiorentina’s successes, one of the most beautiful of my life. For the match against Santos, Fiorentina coach Beppe Chiappella also sent the two Viola internationals on the pitch from the start, goalkeeper Enrico Albertosi and midfielder Mario Bertini (both from Tuscany) who played the match against Romania two days earlier (valid for the 1968 European championship qualifiers) won by Ferruccio Valcareggi’s Italy 1-0 thanks to Bertini’s first goal (in his second appearance) in the blue jersey nine minutes from the end. 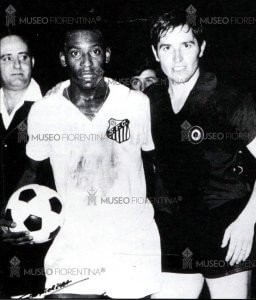 Played: Albertosi; Rogora, Vitali; Pirovano, Ferrante, Brizi; Hamrin, Bertini, Brugnera, De Sisti, Cosma. In Santos Pele wears, as usual, the number ten jersey. Chiappella has him controlled by Pirovano, the midfielder (if necessary also full-back) who has already stopped the most technical opponents in the championship. However, Brugnera, the “false nueve” to use today’s terminology, also lends a hand to Pirovano. The first half offers few emotions. Pele never manages to make himself dangerous and Fiorentina controls the match without too much difficulty. Shortly before the break, however, the referee Monti of Ancona must intervene to restore order on the pitch after a game clash between Brugnera and Pele. In the second half, however, things change. Chiappella sends Superchi, Diomedi, Aloisi, Manservisi and Badari on the field respectively in place of Albertosi, Rogora, Ferrante, Hamrin and Bertini, owners throughout the season. Pirovano, then, begins to feel tired in controlling Pele, also because the evening is particularly hot. Santos’ number ten hits a post after his free kick is rejected by the barrier. 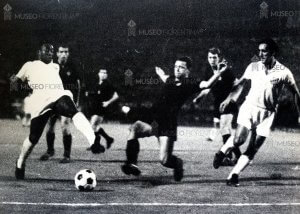 Pele is unleashed who commits Superchi first with a head and then with a great shot. At 25 ‘the Brazilian number ten discards three opponents and is landed in the area. Monti referee whistles the penalty. On the field a riot broke out. Toninho hits Rogora and, on signal from the linesman, is expelled. Two minutes pass from the foul on Pele and at 27 ‘Carlos Alberto who three years later as captain will score the goal of the definitive 4-1 in the final of the World Cup between Brazil and Italy from the penalty spot pierces Superchi (of the national world champion in Santos over Pele Clodoaldo also plays). Fiorentina with the extra man throws himself on the attack. At 35 ‘Alessio Badari, Reggiana player on loan to the Viola for the friendly matches at the end of the season, on an assist from De Sisti scores the final 1-1 goal. The game basically ends there with the applause to Fiorentina and of course to Pele. I can’t wait for. I am happy when I leave the stadium and walk home along the Viale dei Mille. 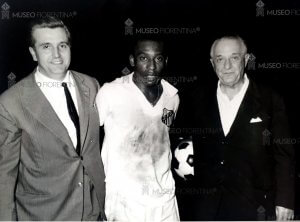 The Brazilian number ten gave us all some fantastic plays, worthy of a champion that he is. But Fiorentina had the great merit of stopping the greatest player in the world, for this reason I am particularly proud.

The City of Rome Cup was won by Santos, who equalized the match against the Viola and won the match against Roma 3-1 at the Flaminio stadium in Rome (Toninho, Pele and Rildo scored for the Brazilians and Peirò for the Capitoline). The Giallorossi are classified in second place. In the last match of the tournament played at Flaminio on June 30th they beat Fiorentina, who had also been ahead by 2-0 thanks to goals from Bertini and De Sisti, 3-2, with goals from Peirò, Polselli and Schulz on rigor.

The Viola formation is in last place but has the great merit of having stopped Santos di Pelè.