THE “DIVIN CODINO” AND… “O’ REY” OF VIALE FANTI

The concept of “playoff”, in Italian football, has never been very fashionable. Just think that to win the Scudetto, the coincidence took place only once, on 7 June 1964, when Bologna and Inter met on the neutral of the Olimpico in Rome. Bologna won 2-0 with goals from Romano Fogli on a free kick (or an own goal by Facchetti, if you prefer) and a doubling by Harald Nielsen … on an assist from Fogli himself. Two side notes: a few days earlier Inter had graduated as European champions, and a few days earlier the Rossoblu president Renato Dall’Ara had disappeared, to whom the “Comunale” stadium in Bologna will (later) be named. Therefore, opposing states of mind that (absurdly) motivated the Bolognese more than the Nerazzurri. Later there were other play-offs: to go up to Serie A, not to relegate to Serie B, to go to a European cup. Whether it was small or large-eared. And this is where our story begins, lived under the (beating) sun of Perugia, dated 30 June 1989. Fiorentina and Rome were the protagonists, with the 7th place up for grabs which meant qualification for the 1989-1990 Uefa. Small step backwards: a year before, coincidentally, there had been another play-off to go to the Uefa cup, Juventus had won it (on penalties) over Turin 4-2. The championship was won by Sacchi’s Milan, Maradona’s Napoli second, with Liedholm’s Roma good third. Fiorentina? Eighth with 28 points that, at least that, had shown promising young people such as Nicola Berti, Davide Pellegrini, Roberto Onorati and Alberto Di Chiara. Plus a certain Roberto Baggio who, in the middle of the season, was about to be sold to Pescara … on loan. It is difficult to imagine, therefore, that a few months later the two teams (Roma and Fiorentina) would have played for entry into Europe, as equals, in a torrid and hard-fought play-off. And instead… 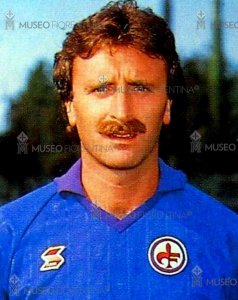 To make the difference a couple that made history, Roberto Baggio and Stefano Borgonovo. The first, as we have said, had escaped the broken cap from a loan to the Adriatic, and in the months to come he had reached such a maturity that would have projected him to the top of world football. The second, coming from Milan (closed by the various Gullit, Virdis and Van Basten) was looking for space and glory, from the bottom of a compact and able-bodied physique, from the top of a superfine technique and an unparalleled sense of goal. The mix between the two is explosive: the plays, the inventions, the assists of Roberto at the service of the cunning, the cunning, the opportunism of Stefano, such as to catapult Fiorentina to the top of the standings. The secret? Spectacular game, all-court pressing and lots and lots of fun. Maybe a little light on a physical level, but always applauded and appreciated, in every place, in every lake. After all, two figures are enough to explain everything: beat Inter record twice (one in the preliminaries of the Italian Cup, the other in the 17th of the championship), beaten Juventus at home (goal in the 90th minute by Borgonovo), away victories against Cesena, Atalanta and Sampdoria. In total 29 goals (the famous “B2”): 15 Baggio, 14 Borgonovo, and then the last act in Perugia which (coincidentally) will represent for the Viola the stage of the triumphal ride in the next Uefa cup. 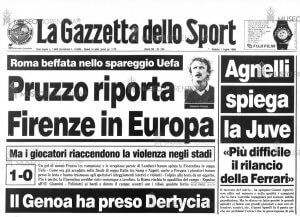 It’s hot at the “Renato Curi” in Perugia that day, Fiorentina got there by virtue of a great first round, Roma (on the contrary) with a comeback that materialized only on the last day: Fiorentina defeated 2-0 by Inter champion of Italy, Rome beating Atalanta 2-1 at home thanks to the goal of Rudi Voeller. Perugia, let’s face it, has always been a Romanist fief, like Avellino (a year later) will prove to be a Juventus fief. The stands of the Curi (more or less a capacity of 25,000 spectators) are divided 80% Rome, 20% Fiorentina. But the verdict is not taken for granted. Also because, in the Viola home, there is a variable from 138 goals in 314 official appearances, a Scudetto, a Champions Cup final, 4 Italian Cups, 3 top scorer titles … all won with the Roma shirt. In partial compensation, the wrong goal under the “Fiesole” with the Genoa shirt (May ’78, decisive for the Viola’s salvation) and the candidacy (summer ’81) as a new center forward for Fiorentina. Eventuality then lapsed in favor of “Ciccio” Graziani. Yet that day, given the absence of Borgonovo (who had already returned to the Rossoneri parent company for the end of the loan), the owner with number nine was playing “O rey di Crocefieschi”, Roberto Pruzzo. Which, for a few hours, was transformed into “O ‘rey di viale Fanti”, home of Fiorentina from 1931 to today. But let’s go into the news: the 12 ‘runs, Battistini’s break in midfield, relaunch on the left for the rushing Di Chiara (another ex-Giallorossi), unloading on Roberto Baggio who sees “O’ rey” out of the corner of his eye. he had freed himself in the area. Slow but precise cross, Franco Tancredi who fails (“butterflies” one would say in jargon) and the goal is child’s play. He will be the only one in the purple jersey after 16 miserable appearances (including the Italian Cup), he will be the last in his career for the Ligurian bomber: a goal scored precisely against Roma, friend, mother, sister, companion of a lifetime spent on the football fields. 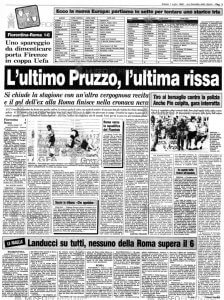 The rest did the goalkeeper Marco Landucci (author of his best match in the purple jersey), the central couple Pin-Battistini, the inexhaustible Dunga (assisted by Massaro), Alberto Di Chiara always ready to restart and to overturn the action. In the end we can say, without fear of denial, that the Fiorentina one (expertly orchestrated by maestro Sven Goran Eriksson) fully deserved the qualification. If not for what was shown in the play-off, as for the whole season. Qualification embellished by the Uefa tournament to come, with the terrible final that we all sadly remember. 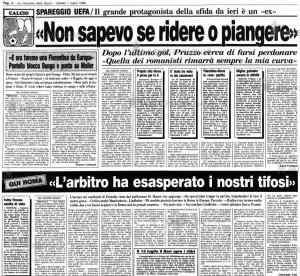 The ancients teach that football has no memory, that everything is consumed quickly, that never as in this sport is the saying valid: “sic transit gloria mundi” … only to disperse and never find each other again. But if the Fiorentina of the “rector of Torsby”, of the B2, of Dunga, Battistini, Carobbi and Di Chiara, if you start like the 4-3 with Inter, the victory with Juve, the play-off with Roma, are celebrated at every step, there will be a reason. It is about history, passion, a sense of belonging … values ​​such as the shirt, the emblem, the pennant, everything you need to recognize yourself, and to count yourself. Because when we talk about Florence and Fiorentina, despite the numerous appeals, believe us … we are not, and we will never be enough.