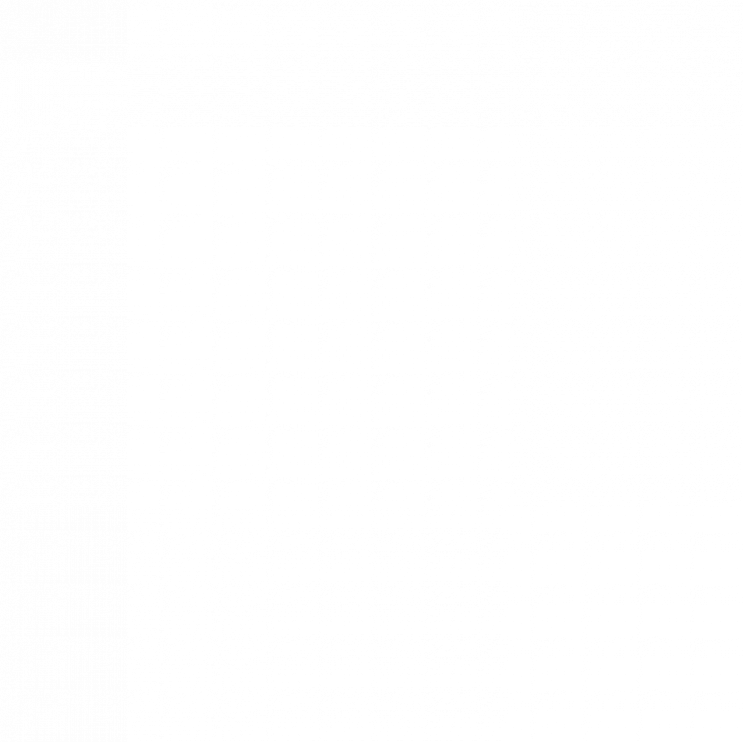 THE FIRST IN CHAMPIONS, YOU WILL NEVER FORGET…

Once upon a time there was the European Cup, the highest continental football tournament for European club teams. The so-called “big-eared cup”. In 1992 the European Cup gives way to the current Champions League, handing down to posterity a very rich palmarès: 6 victories for Real Ma-drid, 4 Milan and Liverpool, 3 Inter and Bayern Munich, 2 Nottingham Forest and Benfica, just one Manchester United and Barcelona. None … Juventus, net of May 29, 1985, or the tragic night of Heysel. A match that should not have been played, and which was decided by a non-existent penalty whistled one hectare outside the area, won by Zbigniew Boniek (shining product of Polish football) who exploded in Widzew Lodz, opponent of the viola. Boniek himself, in the summer of ’82, had moved to Ju-ventus to team up with another champion of European football, Michel Platini. And Fiorentina? Two participations, with alternating fortunes and usual misfortunes. We are talking about the seasons ’56 -’57 and ’69 -’70, a final with the same Real (we mean mugged?) A quarter-final with the Scots of Celtic, thrown to the winds for questionable technical choices. So why, given the previous ones, are we talking about “first time”? We tell you right away: because in the new version, the viola, only 29 years later listen to the “musichina”, exactly on 11 August 1999. It is the date of Fiorentina-Widzew Lodz 3-1, the subject of our reflections. In this regard, two small comments:

1) The definition of “first time” in the Champions League (you will forgive us) is a little inappropriate, since Fiorentina, thanks to the third place in the previous year, had obtained access to the preliminary round and not to the actual Champions. But as they say in Rome: “it is a look at the hair”.

2) The “little music” above. The phrase “listen to the music” has now entered the usual lexicon. It is nothing but the official anthem of the Champions League, and being able to enjoy it is the sign that your team is finally playing with the big names in Europe. Translated: spectacle, magical nights and plenty of emotions. For the sake of completeness of information, the “musichina” was composed in 1992 by Tony Britten specifically for the newborn Champions, and is inspired by Georg Friederick Handel’s coronation anthem. 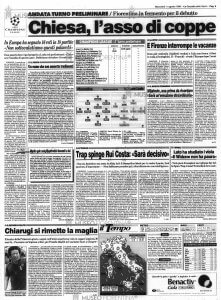 THERE IS NO MORE EDMUNDO … AND THERE IS NOT EVEN BATISTUTA!

It is useless to go back to the Carnival, to the riotous Edmundo who abandons the Champions in winter, abandoned in turn by the strongest striker in the world, sacrificed on the altar of the run-up to the third scu-said. In that August 1999, Edmundo returned to Vasco, Batistuta injured his other knee, so that Giovanni Trapattoni’s Fiorentina showed up for his “first time” without the two elements that had dragged it more than others. It would be as if you showed up at the first appointment in jeans and without a bouquet of flowers in your hand. And instead … Mind you, there were no Edmundo and Batistuta it is true, but there were still Toldo, Torricelli, Heinrich, Firicano, Padalino, Cois, Chiesa, Rui Costa … And the last two will be the absolute protagonists of the evening together with an outsider (Daniele Adani, good as a footballer as well as a commentator) who after 20 minutes brings in advantage the viola collecting a perfect cross from the father of art. Daniele Adani, a new Batistuta, shoots Dudek with a perfect header and scores 1-0. 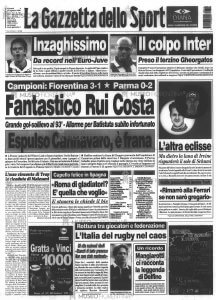 At the beginning of the second half he repeats: Enrico Chiesa once again cove in the center of the area where the second outsider, Sandro Cois, takes off imperiously and leads the lily nets to two: Fiorentina 2, Widzew Łódź 0. And the Poles? Struck, dazed, bewildered, there is no Batistuta (they must have thought) and despite everything we are already 2-0 down? Adani’s own goal will be worth nothing in the 73rd minute because “O ‘Maestro” climbs up to the throne with Manuel Rui Costa after five minutes from the end. The Portuguese receives from Heinrich on the left out, caracolla, eludes the Polish defense with the right outside and inside signs the final 3-1. Right result in the proportions, exalting for the emotions, reassuring for the return match. Which in fact (2-0, Chiesa and Cois again) will be without history. 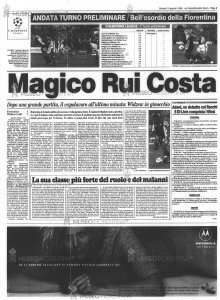 HIGH, LOW, AND THE USUAL FINAL

It seemed like a dream, a fairy tale, and the Champions League (like all dreams and fairy tales) will live up and down. Alas … NOT as in all fairy tales there will NOT be a happy ending. But the usual ending, when Fiorentina is involved.

Fluctuating season, which ended with a good seventh place for the 2000-2001 Uefa Cup, (on which the presumption of Terim will spread a pitiful veil), first round of Champions cloaked in glory thanks to the triumph at Wembley and Bressan’s goal against the Barcelona. Second round started in a triumphant manner (2-0 at home over Manchester United) ended with the usual referee abuse in Valencia (regular goal canceled by Rui Costa with Cuper men flying to the final). By the way, in the same period (after only 24 hours, albeit on Tuesday and not Wednesday) there was another “first time”: it was August 12, 2008 and Fiorentina-Slavia Prague finished 2-0 (goals by Mutu and Gilardino). 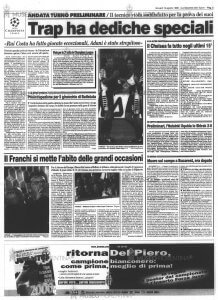 Their goodness … about Julinho, Montuori, De Sisti and Amarildo have read something and heard their grandfather tell. They saw some pictures of Batistuta and Rui Costa and heard their father speak. With Mutu, Gilardino, Jovetic and Vargas instead saw what the Champions League is, they felt the “musi-china”, they enjoyed, vibrated, exulted in the first place … and not through third parties. Which is never the same. Today it’s up to them, tomorrow to the children, then to the grandchildren. Until eternity.

All this is called joy, magic, happiness … the pleasure of cheering all together, always and only Fiorentina