After thirteen years, Fiorentina returns to win the Scudetto. A victory that came at the end of an exciting season, fought shoulder to shoulder with Milan and Cagliari, in which the “ye ye” boys completed their growth by becoming Italian Champions eight days before the conclusion of the championship.

The seal of the company is placed on the enemy field of Juventus, where Fiorentina had not won since the year of the first championship (1955-56).

The lilies’ riot broke out in the 23rd minute of the second half, with the Viola already ahead thanks to the goal scored by Chiarugi in the third minute of the second half. A long pass by Ferrante is tamed on the fly by Chiarugi, ball on the ground and away, inside the Juventus area. Luciano evades the intervention of the defenders, passes the ball on the right to the rushing Maraschi who touches from the outside and passes the goalkeeper Anzolin out. The enthusiasm is unstoppable and contagious. Superchi runs up to the middle of the field to embrace Ferrante, Maraschi is overwhelmed by his teammates, while on the bench Pesaola is lifted and the stands seem to collapse.

Fifteen thousand viola fans are in Turin to support Fiorentina against Juventus and immediately show their joy, inside and outside the stadium. There is time, on the return journey, also to stop in Piazza Duomo in Milan to make carousels under the Madonnina. All the others, who remained in town, had their heads in the game and were waiting for the radio to communicate the final result. Many tried the strangest telephone connections with Turin, but, in the age of fixed and non-mobile telephony, the news did not arrive in real time. A few words were enough, broadcasted: “Fiorentina is the champion of Italy”, to unleash great carousels around 6 pm. The historic center, which at the time was open to car traffic, became the destination for cars and mopeds that invaded the sacred places of tourists: Piazza Duomo, Piazza Signoria, Santa Croce, Santa Maria Novella. A continuous din, punctuated by the blows of the horns, while someone immediately tried to bring the flag to the top of the Arnolfo Tower, but it was not possible: the doors were barred, the flag was put up the next day.

The parties in the square had breaks, all at home or in bars, only when the TV broadcast the second half of Juventus-Fiorentina and for the broadcast of the “Domenica Sportiva”, which had the viola team as a guest – the conductor Enzo Tortora had organized Ferrante’s haircut live. Interruptions that had left the city tinged with Viola, but without traffic. An illusory silence, because after midnight the station overflowed with cars, the roads were paralyzed, football was played at the Duomo. And the trains from Turin had yet to return, which everyone was waiting for to celebrate together!

Days of joy, of spontaneous and organized parties: a purple cloth with tricolor ribbon adorned the ears of the pig, a procession of old carriages moved with the purple flag on top of the whip, the hairdresser Roberto Persiani (hunchback) had the portcullis of his shop in San Firenze dyed purple, rockets were fired in San Frediano, the purple fabric had ended up in the shops of the city and was expected from Gallarate … to sew flags and flags drapes 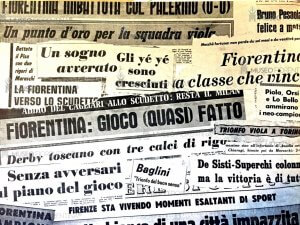 These are the years of the workers ‘and students’ protest, of the collective participation that changes the whole society. A revolution in the way of thinking, dressing, making and listening to music. Fiorentina ye ye represented, with its ease and irreverence, that spirit on the playing fields. The ways of experiencing the stadium and interpreting cheering are also changing, with the collective protagonism and action of the new generations.

The 1968-1969 championship was the fourth year of Baglini’s presidency. Fiorentina had just returned from the disappointment of the previous year which began with great enthusiasm “the ye ye towards the Scudetto” and who had seen, in mid-December, with the team in crisis of results and play and with deep cracks in the locker room, take the tough decision to replace Chiappella, the architect of the young team, with an internal solution represented by the couple Andrea Bassi and Luigi Ferrero.

In the summer the sporting director Carlo Montanari returns who, having skipped the possibility of hiring Helenio Herrera, proposed to President Baglini to choose Bruno Pesaola, an Italian-Argentine from Buenos Aires who had brought Napoli to second place last season.

The square did not welcome him very well, he brought with him the fame, which he will also confirm in Florence, as a great poker player and smoked an incalculable number of cigarettes. Black eyes and thick eyebrows, a continuous movement of the eyelids, the “Petisso” never refused the interviews that he often turned into monologues. In the first message he sends to the Florentines, he does not pose as a magician, but as a prophet of successes:

“Don’t worry: the next championship will give them more satisfaction than they imagine. I know I have a lot of players of considerable value, with a midfield that is among the best in Italy, if not the best; from these men I will get everything they can give and with them we will fight on an equal footing with any other team. On my own I am calm; and even if the Florentine press did not appear very enthusiastic about me, I know how to wait: I prefer to be judged by the facts rather than by the impression at first sight. What I want, however, is that the press is close to the team, encourages it, supports it, and if there is a criticism to be made, let it be done, but always with the aim of building and not destroying: the players are young. and they are always sensitive to press criticism! ” (Alè Fiorentina, n.11, July 1968). 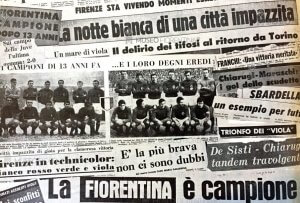 The transfer campaign left the fans dumbfounded: Albertosi sold to Cagliari, together with Brugnera in exchange for Rizzo. To replace the national team goalkeeper, Superchi, seven appearances on goal the year before, with Bandoni, taken from Mantova, as a reserve. The titular defense was confirmed, with Pirovano as the first reserve, and the young Cencetti as an alternative. There was a lot of focus on full-back Stanzial, bought by Spal, but which will not confirm expectations. After four seasons as team leader, the Bertini international was also sold to Inter for 400 million. The other signings are the young Mariani winger from Modena, the other Bertogna winger, co-owned by Venice and which will then end up in Rome in the November market. Another winger also arrives in Florence, the mature Danova, and the very young striker Del Fabbro. It certainly does not seem like a strengthening campaign. And what’s more, the summer is filled by Amarildo’s sister, Nicaea, who looks after his interests and threatens not to return him to Italy unless an appropriate contractual adjustment is made…

As in previous years, we start from the retreat in Acquapendente, accommodation at the Hotel Roma owned by the Marziali brothers and with another pair of brothers, the Farabullini, to be the factotum of the viola company. The pre-season gives some satisfaction, the victory against Inter, but also the burning elimination from the Italian Cup in the first round: the qualifying round sees Foggia and Fiorentina on equal points but, for goal difference, the Apulians pass.

In the league, except for the home defeat against Bologna on matchday five, the start is beyond all expectations. Fiorentina demonstrates with extraordinary determination that they have become a team of temperament, a quality historically lacking in the Viola. The midfield appears to be the department of excellence of the lilies and soon dreams of glory begin to be nurtured.

The goalkeeper is a winning bet, Superchi manages to chase away the shadow of the great Albertosi.

The defense is based on a young but well-matched central couple: the “free” is Ugo Ferrante from Piedmont, the stopper is Giuseppe Brizi from Marche. The full-backs are two excellent athletes, the elderly Rogora, a ruthless scorer, and the younger Eraldo Mancin, but they are not considered as good as those of the direct competitors for the title. The defense will be flawless throughout the tournament, providing a performance of extraordinary regularity. In the median, Bertini’s jersey, after an uncertain start, will pass on the shoulders of Salvatore Esposito, destined to form the best midfield of the tournament with Claudio Merlo and Giancarlo De Sisti. The decision that proved decisive was to replace two national team holders with two very young players who had just entered the first team: Superchi and Esposito for Albertosi and Bertini. 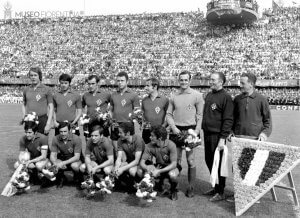 In the first races, however, Pesaola focused on midfielder Merlo, with Rizzo and De Sisti inside, which was, on balance, the only thing that the Argentine technician hadn’t hit right away.

At the attack, in addition to a superb season of the playmaker Amarildo, confirmed after the serious injury that had affected his performance in the first season in the viola, there was the strong midfielder Rizzo, former national team in search of redemption, and center forward Mario Maraschi globetrotter who settled very well in Florence. The class and the extraordinary verve of Luciano Chiarugi were decisive in detaching the two contenders in the final season. A little bit for those who had dreamed of decidedly more fascinating names. There was also another protagonist of the Scudetto: the Viola audience. In the mid-sixties the first viola club (Ridolfi, Vieusseux, 7 Bello and many others) were born and in 1965 was formed the Coordination Center of the viola clubs which published its own monthly magazine, Alè Fiorentina. The cheering was changing, becoming warmer and more colorful, and assuming the role of “twelfth player” who strongly supported his team from the stands, at home and away.

The Museo Fiorentina has dedicated the book Champions to the 1968-69 championship. Fiorentina 1968-1969. The book is introduced by the prestigious prefaces of CONI, FIGC, Lega Serie A, Glorie Viola, captain De Sisti and reconstructs the Italian and international football of the late sixties.

The victory obtained by the Italy National Team in the 1968 European championship and the second place in the world championship in Mexico, under the guidance of the “Florentines” Ferruccio Valcareggi and Artemio Franchi. 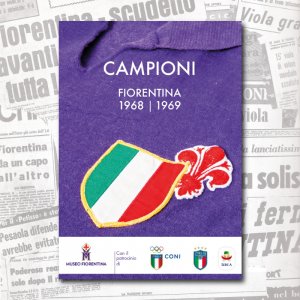 The volume tells about the birth of Fiorentina ye-ye, the result of the economic recovery policy imposed by President Baglini, but also of his sporting ambition, his intuitions and his diplomatic skills. Everything starts from the victories of 1966 (that of the Viareggio Tournament with which Chiarugi, Merlo, Superchi, and those of the Italian Cup and the Mitropa Cup), but also from the rebirth of Florence after the Flood with the great reaction of the city ​​and the world that gathered around it. All the matches of the season are reported, starting from the withdrawal; the championship is told with articles and with Fiorentina scores, accompanied by photos of the time. The book is completed by a section with cards and profiles of the Italian champions players, match tickets, the stickers of the lily players, a color insert with Fiorentina uniforms and photos of the original shirts. The work was given to all the protagonists of the Scudetto and cannot be missed in the homes of the Viola fans.