Valmaura Stadium in Trieste, the referee’s threefold final whistle marks the conclusion of the match which ended in a draw with one goal on each side, but there is something anomalous. The game ended and Fiorentina remained on the pitch. The Viola team awaits news from the radio on the Juventus-Milan result. Zero to zero, marks the announcer.

The spectators, over twenty thousand, who flocked to see the team of wonders, shout: “Long live the champions of Italy”. The players hug each other and with them the coach Bernardini, the team manager Giachetti, the masseur Ubaldo Farabullini, the vice-president Pacini who took to the pitch with Palli, the other adviser who had accompanied the team to Trieste.

With five days to spare, in football where the victory was worth two points, Fiorentina is mathematically champion of Italy. For the first time in its history, thirty years after its birth, strongly desired by the Marquis Luigi Ridolfi who had imposed it on the Club Sportivo and Libertas. It is the completion of a masterpiece. 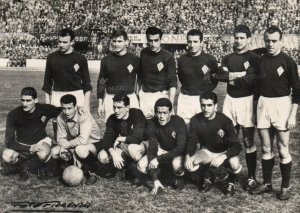 Fiorentina won and convinced, giving the feeling that a formation worthy of the Grande Torino, who fell tragically in Superga, was finally back. Guido Gratton cries, in the middle of the field, lost like a child lost in the crowd, but no one is given the time to isolate himself. Cervato and Chiappella involve everyone in the hunt for Bernardini: the coach does not want to be lifted on their shoulders, but has to surrender to the strength of the group that he himself has created and the audience applauds the coach brought in triumph.

From Bernardini only a few words of thanks, for everyone, and the regret that there are not Montuori and Rosetta, who remained in Florence because they were injured, and Prini whose father died a few days earlier (Fiorentina played with mourning on the arm).

In the evening, at the hotel, the first telegram arrives which, more or less, read like this: “Thirty years of sacrifices and hopes and now the well-deserved triumph”, signed by Luigi Ridolfi. 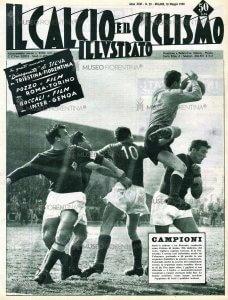 Let us tell the rest from the pen of a great journalist, Nuto Innocenti, in an article published in the Florentine newspaper “Il Nuovo Corriere” of 8 May 1956:

“Happy night in Trieste. In all the rooms there was praise for the new champions “graduated” in the Julian land. Recognized, the Viola players were forced to follow local sportsmen in their fraternal, welcoming displays of sympathy. Someone, timidly crossed the threshold of a fashionable dance, was even held hostage until the orchestra had performed a vast repertoire of Florentine songs. The refrain ran over everyone’s lips, glasses rose. Lucentini, who once wore the Viola jersey, was also with his old teammates. He felt a bit of a champion too. The train that will take us back to Florence is leaving on the second track. All the authorities of the Trieste station are under the shelter for the farewell. It is an important train. The workers who go to the Monfalcone construction sites crowd around Gratton whose family lives a stone’s throw from their workshops. Finally we leave, but in Cervignano, where Bernardini has made an appointment with Virgili – who went last night to have dinner with his family, in Udine, and who in Cervignano will reconnect with the team – new stop, new demonstrations.

Virgili is waiting for the convoy under the shelter, very punctual. They escort him, like a bodyguard, his friends and all the relatives. Pecos Bill limps off to the train it was a tap from Bernardin, a quick and hard centromedian. But Virgili does not hold a grudge, does not give weight to the lameness. He reciprocates kisses and hugs and gets into the car with a large bundle under his arm that he will jealously guard during the trip, Prosciutto, Farabullini tells me in a low voice … a specialty! The new champions occupy the first hours of the trip by reading newspapers in which Fiorentina stands out in the place of honor. Everyone goes to look for a phrase, the one that concerns him. They are humble, modest, but printed paper exalts them. The Julian countryside is dazzling with sunshine. It seems that spring has waited for this festive morning to decide to come out of its lethargy. Isn’t Fiorentina the team of the spring? In Mestre the first signs: Hurrah the champions of Italy; in Venice dense gathering on the square of Santa Lucia lapped by the waters of the lagoon. Julinho takes advantage of the long stop on the train to admire the unusual landscape and follows with curiosity the slow navigation of a black gondola. And he runs to a jewelery stand to buy two souvenirs for his wife, for his son: two miniature gondolas enclosed in a crystal globe. In the dining car, full of foreigners, immediate, cordial friendship between a group of elderly English ladies and our Magnini, Chiappella, Gratton. The Viola trio sings Neapolitan songs. A great success. Little by little all the diners join the choir except Julinho who, on the sidelines, looks at her costume jewelery with childish eyes … Padua, Ferrara, Bologna. Always signs, always cheering crowds, pointing to the new champions facing the windows. It is a triumphal march that runs quickly towards its Florentine epilogue. President Befani is waiting in Prato. Work commitments had prevented him yesterday from being in Trieste with his players and now, who has them under his eyes, he can’t say a word to them “. 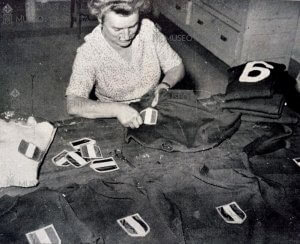 On that Monday afternoon in Florence, where the purple flag was already flying over the Tower of Arnolfo, there were more than three thousand fans who had filled the Santa Maria Novella station to greet their champions.

In a few months a book will be released, dedicated by the Museo Fiorentina to the Champions of 1955-56, which will tell, moment by moment, that extraordinary enterprise.