I consider myself a privileged one. I spent two years conducting research and studying every aspect of the first edition of the 1960/61 Cup Winners’ Cup and every aspect related to its history and its protagonists, working on the project of the book “THE LIONS OF IBROX” that the Museo Fiorentina has created.

Going back in time, diving into the chronicles, documents, images that made up history is an authentic privilege, only the deep and respectful knowledge of our past allows us to consciously look towards the future.

The fascinating story of this first edition of a new continental trophy is the cross-section of another historical period, of a different world of football, the history, above all, of the men of that period.

The spirit with which such relevant historical-sporting events are reconstructed and brought to light again is not only to emphasize simple sporting results, but to highlight the depth of the men who have accomplished the sporting feat. and the context in which it matured.

The history of the Cup Winners’ Cup begins in the spring of 1960, when a confrontation between individual Federations begins on the hypothesis of establishing a new European tournament that sees the winning teams of their respective National Cups as protagonists.  It is the Mitropa Cup Committee that strongly believes in the value and possibility of development of this new European competition, inviting the individual Federations to join the project, after its General Assembly held in Vienna on February 15, 1960. 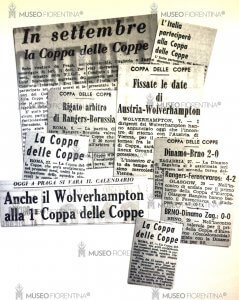 On Friday 3 June 1960 at 12.45 the Italian delegation, made up of Dr. Giorgio Perlasca, treasurer of the League and representative of the FIGC and Luigi Scarambone, secretary of the Inter-League Committee, leaves in flight for Prague where, the following day, the work of the Organizing Committee of the Central European Cup called Mitropa Cup will begin.

In the Czechoslovakian capital on 4 and 5 June 1960 the delegates from Austria, Czechoslovakia, Hungary, Italy and Yugoslavia, in addition to fine-tuning the Central European Cup calendar, definitively launch the first edition of the new Cup Winners’ Cup. UEFA delegates the organization of the new event to the Mitropa Committee providing collaboration only for the referee designation.

It is established that the winning teams of the National Cup of: Austria, Czechoslovakia, Italy, Yugoslavia, Hungary, Switzerland, West Germany and the newly admitted England will participate in the event, whose President of the Richards League is included as a councilor in the Organizing Committee, chaired by Selzer former president of the Austrian Federation. The Federations of East Germany and Scotland also submit a request to register their winning teams of the National Cup in the new competition: the Committee decides to accept their request, establishing however that these representatives will have to carry out a preliminary round to be carried out for East Germany against the Czechoslovakia and Scotland against Hungary.

Each team, before the start of the Cup Winners’ Cup, must deliver to the Organizing Committee a special list of players registered for this event, a list that will remain so for the entire duration of the tournament.

The two winning teams, after home and away matches to be played by 15 August, will advance to the quarter-finals.

Each team, before the start of the Cup Winners’ Cup, must deliver to the Organizing Committee a special list of players registered for this event, a list that will remain so for the entire duration of the tournament. The regulation also establishes that no substitutions will be allowed during the Cup Winners’ Cup matches, even in the event of an injury to the goalkeeper, therefore no reserves will sit on the bench. Before each match, the national anthems representing the countries of the two contenders will be played at the expense of the host team.

The teams designated to participate for each Federation are the following:

On 24 January 1961, UEFA sent an official communication to the Mitropa Cup Organizing Committee stating that from the 1961-62 season the organization of the Cup Winners’ Cup will be entirely under the responsibility of UEFA itself. The statement shows that after only the quarter-finals, while the event is still in progress, the newly created Cup Winners’ Cup arouses such interest throughout Europe as to sweep away the residual initial doubts revealed by UEFA, which now happily assumes total control.

In 1963, at the official request of the FIGC, UEFA officially included the backdated first edition of the 1960-61 Cup Winners’ Cup in its palmarès, giving it all official UEFA event rights.

This allows AC Fiorentina to claim the title of the first Italian team to win a UEFA competition.

The 1960/61 Cup Winners’ Cup was a magnificent adventure, experienced by the Fiorentina group with enthusiasm and great commitment, earning the final after eliminating the Swiss Lucerne and the Yugoslavs of Dinamo Zagreb with home and away matches.

The double final saw the trip to Scotland as the first match, on the fearsome terrain of Ibrox Park, where eighty thousand screaming fans close to the pitch constituted an additional obstacle that had allowed Rangers Glasgow to remain undefeated for years within the friendly walls. 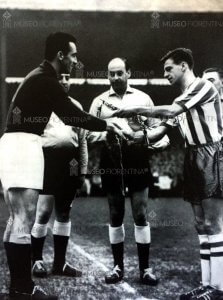 On May 17, 1961, Fiorentina played an amazing game, bearing the brunt of the hosts with courage and determination, amidst numerous forbidden strokes allowed by the overly permissive match direction. The Viola hit on the counterattack with two goals from Luigi Milan, achieving a historic feat, violating a previously impregnable terrain and deserving the heroic nickname of “Lions of Ibrox”. 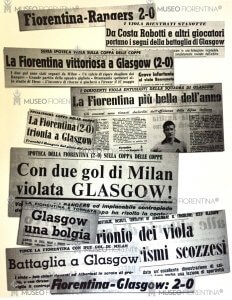 The return final in Florence on May 27, 1961, sees Fiorentina beat the Glasgow Rangers again 2-1 with goals from Luigi Milan and Kurt Hamrin and it is the purple captain Alberto Orzan who raises the first Cup Winners’ Cup in history! 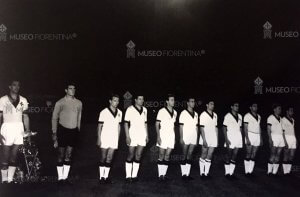 The Fiorentina team in final return in Florence (Photo TORRINI)

These are the names of “LEONI DI IBROX”: 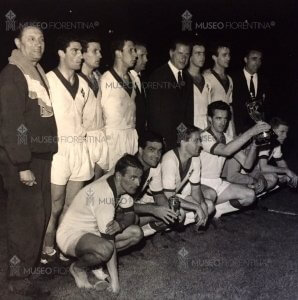 Those sixties boys in viola shirts are now mature men, with white hair and some of them unfortunately have already flown to heaven. At the time, their victory did not receive the necessary clamor and recognition: it was the first edition of a new trophy and European football was often considered less important than the Italian championship. There were no means of communication today that are able to emphasize every little event. Their great historic milestone, reached in front of the public in Florence, was not celebrated in proportion to its real value. 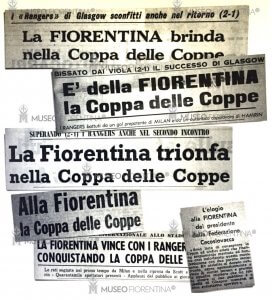 Today, after sixty years, that victory is even more important and they, the men who won it, are so modest and simple that they hardly feel like the real protagonists of a great football feat.

Getting to know these viola champions was a great honor for me, studying their exploits was exciting and compelling, but what moved me most was discovering the man who is hidden inside each of them, simple, modest people, gifted with great greatness. dignity and full of strong and rooted values ​​that time has not scratched and that give the exact measure of their greatness, children of an era that did not leave room for the cult of appearing but reserved room only for the concreteness of being.

The Fiorentina 1960/61 boys formed a united group made up of young men capable of fighting side by side silently, without saving energy and sacrifices, until they were able to reach an unexpected goal and be able to raise the first Cup Winners’ Cup in history to the sky. . 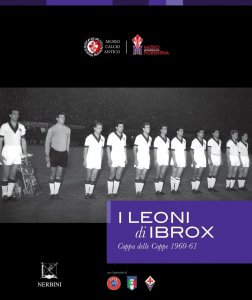 The book “I LEONI DI IBROX” of the Museo Fiorentina is dedicated to all of them, real men who, with disarming modesty and unwavering determination, have achieved a great feat that has entered the history of Italian and European football.

Forever thanks to all of you, Lions of Ibrox!