There is a recurring question, which spans times and generations: but why is football so popular all over the world?

Anyone who knows and deeply loves this sport knows well that it is not possible to answer by rattling off a list of precise reasons: this would be equivalent to not considering in any way the extraordinary subjectivity of those who cultivate their emotions with the necessary care.

However, if we were to make a similar list, we couldn’t help but mention the factor of unpredictability.

An element that constantly accompanies us in our life and, needless to underline it, in our purple passion.

If, in normal everyday life, it manifests itself through events that are anything but planned, in football the question is slightly simpler.

In this case, in fact, it is the goals that make the difference; especially those scored in the last minutes of the game, when the outcome of the match is now written.

We are talking about networks so “powerful”, for pathos and enthusiasm, that they totally change the course of a game and, sometimes, of an entire season.

It is no coincidence, therefore, that many of the best memories linked to one’s favorite team derive, in large part, from the legendary Zona Cesarini: an expression born in the 1930s to define the goals scored in the final moments of the matches.

Renato Cesarini, as midfielder of the Argentine national team, was one of the main protagonists of that Juventus which, between 1930 and 1935, won five consecutive league titles by leveraging so-called repatriated Italians, the “looting” of provincial teams, money by Edoardo Agnelli and the complicity of fascism.

Having made this necessary premise, it’s time to get back to us.

Courage: let’s fasten our belts and let ourselves be overwhelmed by the most exciting “lily photo-finishes” ever, starting with those of the last quarter of a century!

The match between Udinese and Fiorentina is played at the “Friuli” stadium in Udine. 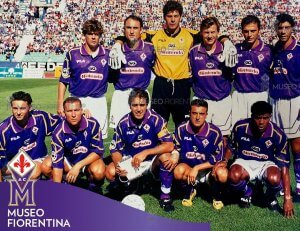 The Friulians are returning from a season that saw them place fifth in the standings and win the qualification for the Uefa Cup with the technical guide of the emerging Alberto Zaccheroni.

The Viola, on the other hand, after four years of success with Claudio Ranieri on the bench, is a team totally renewed by the choice of relying on a young coach who is destined to be talked about.

His name is: Alberto Malesani. 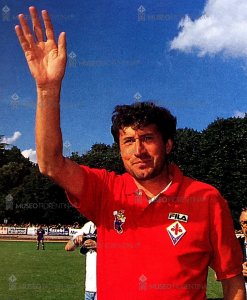 A face still unknown to great football, albeit the protagonist of the beginning of a real sporting miracle: that of Chievo Verona.

A small fraction of the city of Romeo and Juliet landed, incredibly, in the most coveted stages of professional football through an admirable multi-year project.

To “our” Alberto goes the credit, in particular, for having dragged the yellow and blue from C1 to Serie B, proposing a game that is distinctly offensive and studied down to the last detail.

An organization, probably, the result of his work in the logistics section of the famous “Canon” company (specialized in optical products).

The fact is that Fiorentina shows up at the starting line of the top league with the mad desire to surprise everyone.

The opponent of the day, however, is really tough, starting with the crazy trident made up of Paolo Poggi, Oliver Bierhoff and Marcio Amoroso.

It is the latter who assumes the role of absolute protagonist in the initial 45 minutes of the meeting … first he unlocks the result, around half an hour, with a very easy tap-in close to a few centimeters from Toldo … then ( naively) lets go to an ironic applause towards the referee … the referee Messina does not like and draws the red card against the Brazilian.

A recurring situation both in life and in the game of football: go from glory to dust in seconds!

Fiorentina, on the other hand, shows that they have already mentally absorbed Malesani’s ideas; at least in large part.

However, the transition from theory to practice still requires a certain type of testing: in the meantime, therefore, it is good to rely on your own certainties, starting with our indomitable Lion King. 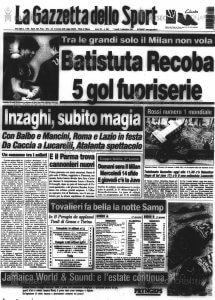 Gabriel Omar Batistuta returns, therefore, in his own way … perfectly tames a pass coming from the left wing and pierces the opponent’s goal with a powerful right-footed rebound … 1-1 viola and plenty of half an hour to play again in numerical superiority.

In short, the prerequisites for returning home with success would all be there.

In spite of the above, Udinese decides to drop the Jolly Poggi: fantastic twist of the Friulian attacker in the lily area and left placed at the corner of the posts for the classic “Sunday goal”.

The innocent Toldo observes the scene and violently slams his gloves on the green lawn as a sign of anger and, perhaps, also of surrender.

In fact, such a beautiful net would cut anyone’s legs; even to a rookie and enthusiastic technician like our Malesani, who showed up at the grand gala of the Serie A in short shorts and sneakers.

The game then drags on inexorably towards a bitter debacle for the entire lily troop.

It takes courage, however, to say such a thing to Batigol.

Punishment for Fiorentina at least 25 meters away from the Juventus goal: we are just moments from the 90th minute.

There is no more time to waste: you have to try everything for everything.

Gabriel knows this and acts like a great champion, firing a surface-to-air missile at the speed of light that leaves no way out for the Friulian defender Caniato: crazy 2-2 and all standing for the now unexpected equal.

The Argentine cannibal, however, does not yet appear sated: consequently, after having cheered in moderation, he remains focused on the piece. 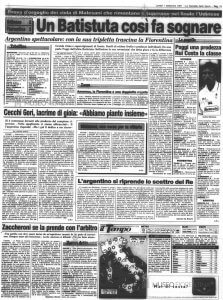 On the other hand, a few seconds after the end of a battle, there is always time for a spell.

Last ball thrown by the Viola in the direction of the Juventus goal … the Friulian defenders hit the ball towards the edge of the area without worrying about the possible consequences … Bati, in fact, is still there ready to strike.

“Lion King”, without thinking twice, then goes up to heaven together with our dreams to send them on the net with an overturning to the limits of all imagination!

It is precisely at this moment that the love between Florence and Alberto Malesani was officially born: the Veronese technician, in fact, forgets his role and runs in tears from the Gigliati fans who have come to “Friuli” to shout the miracle and rejoice with them as an authentic purple ultrà! 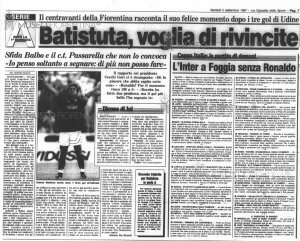 An emotion as strong as Batistuta’s splendid hat-trick.

An enterprise capable of “overthrowing” the destiny of Alberto and of all Fiorentina.

The end of the season, in fact, will give the lily hearts a well-deserved qualification in the Uefa Cup, the result of an excellent fifth place finish (even) with seven away victories.

We have just told one of these and, without the blessed Zona Cesarini Viola of 31 August 1997, it would have been a whole other story!