Starting from scratch, putting your heart on the line and fighting hard for a better future.

A duty and a necessity.

Both in life and in football.

All the more reason for Fiorentina, or for what remains of it.

The exclusion from the Serie B championship and the relative failure of the purple club go beyond the common thinking of the people.

It is not just a matter of snatching a beautiful “toy” from those who (among other things) invented it first, but of trying to erase 76 years of history, sporting and human, with a court stamp or a brushstroke of ink: all without the slightest pity of those who love this legend.

For us fans, in fact, supporting the Viola jersey has never been a question of money given and received or trophies won and lost.

Ours is “only” a very pure act of faith.

Therefore, dear “Lords of the ball”, do whatever you like: call us Florentia, remove the purple from our shirts and send us to the hell of C2.

Because so much, as a banner appeared in Curva Fiesole says, “Our dignity knows no failure!”

Because, when we return to Serie A (it will happen, rest assured), it will be wonderful to be able to look you in the eye and whisper with a smile on our lips: “Despite everything, we are still alive and stronger than before!”

Because it will be gratifying to look back and be able to shout to the whole world: “I was there!”

The postponement of the first round of C2, group B, is scheduled for Monday 9 September 2002: that is to say Sangiovannese-Fiorentina.

The first step of our rebirth. 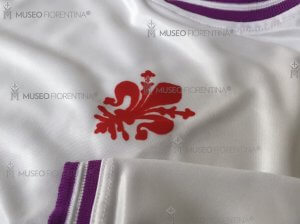 The typical pre-match fever touches dizzying temperatures in Florence, for some too much.

In fact, the President of the Serie C League Mario Macalli is far from enthusiastic about the idea of ​​having to manage, at least, an entire season of endless purple pilgrimages to the periphery of professional football.

Not for nothing, the seat of the game was moved: from the “Virgilio Fedini” of San Giovanni Valdarno to the larger “Comunale” of Arezzo.

We’re not at Wembley, okay, but that’s okay anyway.

After all, all stadiums are built with the same basic idea.

It will mean that we will fill the gap with our infinite pride in being Florentine.

A feeling that belongs by right also to our proud captain Angelo Di Livio.

A glorious symbol of the past, an indomitable warrior in the present and a reliable guide for the future.

Together with him, in view of this long journey, we can count on two other lily glories, protagonists of the “Quasi Scudetto” 1981-1982 edition: the D.S. Giovanni Galli and the coach Pietro Vierchowod.

A real gamble in the latter case; at least judging the first official formation of the new course: an authentic 3-4-3 assault aimed at compensating for the absence of the bomber Christian Riganò (struggling with an old disqualification gained in Taranto).

An act of courage, of course, but also of excessive imprudence.

Sangio, in fact, knows the rules of the category more than any Florentine present in the stands.

The show on the pitch, intended as a beautiful game, unfortunately does not fall within the context of “planet C”: unlike the Serie A, it is the working class that plays the role of the boss here.

The slowness of the maneuvered action, the wrong stops, the too long throws and the lopsided shots in front of goal are therefore part of the game.

And then, as always, it is the great players who break the balance.

The number 9 of the biancoazzurri, for example, seems to have an edge over the other protagonists … in the middle of the first half, it is he who takes the Sangiovannese ahead at the end of a well-orchestrated restart.

The opponent center forward, therefore, runs to the flag as a sign of exultation, not caring at all about our broken hearts.

This gentleman, moreover, is not just any striker: he is Francesco “Ciccio” Baiano.

A man who, together with Gabriel Omar Batistuta, wrote some of the most beautiful pages in the entire history of Fiorentina.

Thinking that his poster covered the walls of numerous Florentine shops and houses in the nineties suddenly becomes a cause for pain.

Just 24 minutes of C2 have passed: our crazy enthusiasm is already a faded memory, at least in the brain.

The numerous Florentines following their new “creature” continue to wave their banners and sing aloud as if nothing had happened: they owe it, at least, to the memory of the immortal Ultras Viola.

Their historic banner, moreover, has been dusted off right here in Arezzo and, for this reason, it must be honored at all costs … both on and off the pitch. 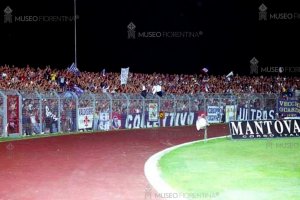 The game, even in the second half, goes by with a thousand and one difficulties: luck has it that the pole opposes Moscardelli’s dangerous torpedo.

A small consolation for those who are on the verge of definitively losing their faith.

A thought that never crossed the mind of Cristiano Masitto.

A center forward who, at the expense of a bad accident to his right hand (with the relative loss of two fingers), has made dignity and will his reason for living.

Who better than him, therefore, can push the team to believe in it again and to fight vigorously until the last playable ball?

95th minute: the curtain is about to fall on the match, as well as on our illusion of rebirth.

Last assault gigliato … desperate throw forward … the Sangio sweeps away as well as it can and does it even badly … the young Viola Quagliarella tames the ball and widens to the right, before crossing the ball in the middle of an impressive forest of legs, opponents and not … the race ends on Masitto’s foot … right flat low shot … the impossible suddenly becomes reality: 1-1! 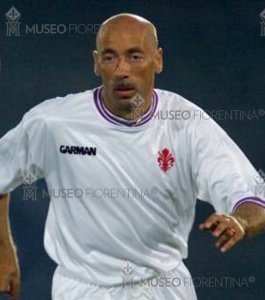 After five centuries, Florence is reborn once again.

After a year of tears lived among the courts, relegation and bankruptcy, purple hearts can finally explode with joy: the “toy” is back, once again, at the center of our world to never leave.

Have a good trip Fiorentina.

Thank you very much Cristiano.