Almost all the stars of world football have played at the stadium in Florence, the current Artemio Franchi, first called Comunale and before that Giovanni Berta. Some of these champions wore the Fiorentina shirt, others were Fiorentina’s opponents in the Italian league or in the Italian Cup, or in official or friendly matches at an international level. Still others have been in Florence with their respective national teams in matches against the Italian one. Some, then, performed at the Florence stadium during the 1934 and 1990 world championships and during the 1968 European championships, organized by Italy. Municipal). I was lucky enough to see several of these world football champions live, including Eusebio. 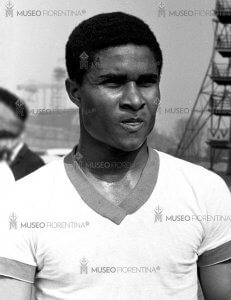 He won the Golden Ball in 1965 and the Golden Shoe, as the best European scorer, in 1967/68 (it is the first edition) and in 1972/73. He also graduated twelve times as top scorer, on seven occasions in the Portuguese league, in three in the European Cup, in one in qualifying for the 1966 world championship and then in the 1966 world championship in England, where Portugal ranks third. (Eusebio scored nine goals, four of which to North Korea, the team that had eliminated Italy, in the quarter-final match won by Portugal 5-3). With Benfica he scored 414 goals between the league and the Portuguese cup, 57 in the European cups and 2 in the Intercontinental Cup, the current Club World Cup, then played between the winner of the European Cup and the Libertadores Cup, the equivalent of Champions Cup reserved for South American teams. Leaving Benfica, he scores another 29 goals in the rest of his career. Eusebio played 64 matches with the Portugal national team, scoring 41 goals. 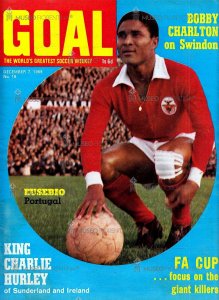 Eusebio plays with Benfica at the Stadio Comunale in Florence on Thursday 18 June 1964 in the semifinal of the Città di Firenze tournament, now in its second edition. Four teams participate: Fiorentina, Benfica, Leningrad’s Zenith, the current St. Petersburg, and San Paolo. For football fans like me this tournament is a real party. The two semifinals are played on Thursday (the first at 19.30 and the second at 21.30) and on Saturday the final for the third and fourth place at 19.30 and the final for the first and second place, the one that awards the trophy, at 21.30. For a ten-year-old child, watching four games live with strong foreign teams in the space of two days is really fantastic, also because at the time on foreign football television and not only there was little of it. Only the recorded chronicle of a time of the most important match of the Serie A day on Sunday at 7 pm is transmitted, in addition to the matches of the Italian teams involved in the European cups, live, however, only from the semifinals onwards. And, of course, the matches of the national team are broadcast live (all those of the 1962 world championship in Chile, however, we see them two days later, because there is no satellite). But the Italian Cup final and the Champions Cup final are sometimes broadcast in recorded form.When on June 18th, shortly after 7 pm, with my dad, I enter the Ferrovia bend at the stadium, there are few people. In the end, the spectators will be about fifteen thousand. At 19.30 the first match is played, the one between the Benfica of Lajos Czeizler, coach of Fiorentina in 1958/59 (when the Viola, second in the league, set the record for goals scored in the 18-team Serie A championship, 95) and the Zenith of Leningrad. My eyes are all turned to the number ten of the Portuguese team, Eusebio, whom Helenio Herrera’s Inter, after winning the Champions Cup, is following with interest to make him wear the Nerazzurri shirt (but he will not succeed; in 1966 the deal seems done but the Football Federation, after the elimination of Italy at the world championship in England by North Korea in the preliminary round decides to close the borders to foreign players). I had seen Eusebio for the first time on television in the 1962 European Cup final between Benfica and Real Madrid, which the Portuguese won 5-3. As a “sick” football player I had attended that game alone in the dining room and at eight the “black pearl” struck me particularly. It is he, at 3-3, who scores the two goals that give Benfica the Champions Cup.

When he arrives at the Città di Firenze tournament, however, Eusebio is not well. He is injured but plays anyway and in half an hour he gives remnants of a good game with a couple of dribbles and a shot just outside. Then, however, he suffers a blow from an opponent and is forced to leave the field. I feel really bad and I hope to be able to see him again in the finals on Saturday. The match between Benfica and Zenith is not particularly good. The Soviets win it 1-0 thanks to an own goal by Cavem in the 11th minute of the second half. At 9.30 pm Fiorentina takes the field and faces the Brazilians of San Paolo. In the ranks of Chiappella’s viola, the nineteen-year-old Prato midfielder Mario Bertini makes his debut, just bought by Empoli who at the time played in Serie C. And there is also Amarildo, on loan from Milan for the Città di Firenze tournament, which Fiorentina will buy from the Rossoneri club in the summer of 1967 and who won the Scudetto in Florence in the 1968-69 season. This is the formation of the viola: Albertosi; Robotti (Benaglia from 25 ‘), Castelletti; Guarnacci, Brizi, Pirovano; Hamrin, Lojacono, Amarildo, Bertini (Balsimelli from 46 ‘), Seminar. San Paolo took the lead with a goal scored by Del Vecchio in the 29th minute of the first half and doubled with a goal from Bazzani in the 38th minute of the second half. Seminar shortens the gap with three minutes left, taking advantage of an assist from Hamrin. Fiorentina therefore loses 2-1 and must be content with playing the final for third and fourth place.

Saturday 20 June I go back to the Municipal stadium, always on the Ferrovia curve. At 19.30 the final for third and fourth place will be played between Fiorentina and Benfica. The spectators present are about eighteen thousand. At the time of the announcement of the formations, on a particularly hot evening, I am strongly disappointed. Eusebio is absent from the Portuguese team. The “black pearl” did not manage to recover from the injury suffered two days earlier in the meeting with Zenith. Chiappella for this match sends the following formation onto the field: Albertosi; Pirovano, Castelletti; Guarnacci, Brizi, Maschio (Matteucci from 46 ‘); Hamrin, Canella, Lojacono (Nuti from 46 ‘), Amarildo, Seminario (Bertini from 46’). Fiorentina, with a very different formation compared to the one who recently finished the championship, immediately appears in difficulty with Benfica, despite Amarildo’s good performance.

The Portuguese champion team took the lead with the half-winger Augusto (deployed with the number seven shirt) in the 11th minute. And Augusto doubles at 43 ‘. In the second half, Fiorentina appears more toned, also thanks to the changes made by Chiappella. And above all, the young Bertini proves to be in great condition. It is he who gives Hamrin the assist for the Viola’s goal after two minutes. Dragged by Bertini and Amarildo, Fiorentina seeks a draw. But Torres in the 24th minute freezes the hopes of the gigliati, realizing the 3-1 goal. Augusto, then, in the 41st minute scores the goal of the final 4-1. It is he, author of a hat-trick, the best of Benfica together with midfielder Coluna and left winger Simoes. Therefore, Fiorentina closes the tournament in fourth and last place. 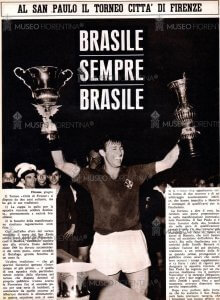 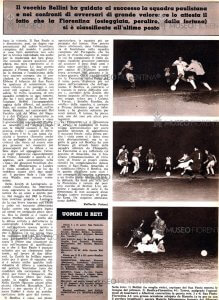 Benfica, on the other hand, returned to play at the Florence stadium in the Mario Cecchi Gori Memorial on 7 August 1996 (the match ended 1-1 with goals from Oliveira and Joao Pinto but, then, the Portuguese prevailed 9-8 at kicks penalty) and, then, on 20 March 1997 in the second leg of the quarter-finals of the Cup Winners’ Cup (the Lusitanians win 1-0 with a goal by Edgar Pacheco, but Fiorentina qualify for the semifinals thanks to the success for 2-0, with goals from Baiano and Batistuta, in the first leg in Lisbon). Another heir of Eusebio who wears Benfica’s number ten shirt as the “black pearl” (but he is a midfielder and not a striker), Manuel Rui Costa, instead arrives at Fiorentina in the summer of 1994 and remains there until in June 2001. He is the one to raise the last trophy won by Fiorentina, the Coppa Italia, in the sky of the Franchi stadium, as a viola captain, on 13 June 2001.

Returning to the Città di Firenze tournament (it is the last edition), at 9.30 pm the final will be played between San Paolo and Zenith in Leningrad. It’s a meager game of emotions. The Brazilians win it 1-0 thanks to a goal scored by Waldir in the 44th minute of the second half. They are the ones who succeeded another Brazilian team, the Palmeiras of the former viola champion Julinho who had won the first edition of the tournament (that of 1963), beating Fiorentina 3-1 in the final. I leave the stadium disconsolate. In the two long evenings I spent at the Municipal Stadium I saw Eusebio playing for only half an hour. Other I had imagined. Furthermore, Fiorentina had finished last. And for a ten-year-old boy – but also for a man of sixty-seven, as many as I have now – it always hurts to see his favorite team lose.