Almost all the stars of world football have played at the stadium in Florence, the current Artemio Franchi, first called Comunale and before that Giovanni Berta. Some of these champions wore the Fiorentina shirt, others were Fiorentina’s opponents in the Italian league or in the Italian Cup, or in official or friendly matches at an international level. Still others have been in Florence with their respective national teams in matches against the Italian one. Some, then, performed at the stadium in Florence during the world championships of 1934 and 1990 and during the European championships of 1968, organized by Italy (no competition of the 1980 Europeans in Italy was, however, played at the time Municipal). I was lucky enough to see several of these world football champions live, including Franz Beckenbauer. Beckenbauer was born in Munich on 11 September 1945, just over three months after the end of the Second World War. He began his career in Bayern Munich, a club in which he remained until June 1977 and with whom he won: four West German championships in 1968/69 (in the same season in which Fiorentina won their second Scudetto), 1971 / 72, 1972/73 and 1973/74; four West German cups in 1965/66 (there is another analogy with Fiorentina who won the Italian Cup that season), 1966/67, 1968/69 and 1970/71; three European Cups in 1973/74, 1974/75, 1975/76; a Cup Winners’ Cup in 1966/67 and an Intercontinental Cup in 1976. With the Cosmos of New York, with whom he played from July 1977 until the end of 1980 and then in the 1982/83 season at the end of which he retired, he won three Nasl Soccer Bowl Champion in 1976/77, 1977/78 and 1979/80. He won another West German championship with Hamburg (the club in which he played after his first experience with the Cosmos and before returning there) in 1981/82 when he was almost thirty-seven years old. 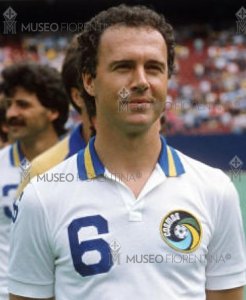 With West Germany he won the 1972 European championship, beating the Soviet Union 3-0 in the final and the 1974 world championship, beating the Netherlands 2-1 in the final. Wins two Golden Balls in 1972 and 1976. Beckenbauer – nicknamed the “kaiser” (in German means the emperor) has played in West Germany since 1963/64 between Bayern Munich and Hamburg 584 official matches, scoring 58 goals and providing 73 assist. These are extraordinary numbers for a player who for a good part of his career is a defender (the free, one of the two central defenders of our time), after having started as a midfielder. The assists he provided are confirmation of his great vision of the game. With the Cosmos he plays 105 matches, scoring 19 goals. He also made 103 appearances for the West German national team, scoring 14 goals. Beckenbauer also wins as a coach. With Bayern Munich he won the German championship in 1993/94 and the Uefa Cup in 1995/96. In addition, as coach of West Germany he won the 1990 world championship held in Italy. With the Brazilian Zagallo and the French Deschamps Beckenbauer he is one of the three coaches to have won the world championship both as a player and as a coach.

Beckenbauer is a true champion. He has good feet and a great vision of the game. He sets the offensive maneuvers of Bayern Munich, Cosmos, Hamburg and the West German national team. When he plays defense, his range of action moves back about twenty meters. But in substance it changes little. Even when he is free, he is the one to restart the maneuver of his team, always playing with his head held high. There is an image of Beckenbauer who has rightfully entered the history of football. During the semifinal of the world championship on 17 June 1970 (in Italy for the time zone is 18 June) in Mexico City between Italy and West Germany, won 4-3 in extra time by the Azzurri of Valcareggi with the captain of Fiorentina Giancarlo De Sisti on the pitch, Beckenbauer dislocates his shoulder. But keep playing stoically with the bandaged arm. West German coach Schon prefers him limping to another teammate in good physical condition. Which speaks volumes about its value.

Beckenbauer I see him playing live when he is now thirty-five and plays in the Cosmos of New York. He comes to play a friendly match with Fiorentina at the Stadio Comunale in Florence on Wednesday 15 October 1980 at 20.30. 1980 for Italy at a sporting level and for Fiorentina is an important year. After fourteen years, the Football Federation decides, in fact, to allow each Serie A club to register a foreign player. The closure took place after the elimination of the Italian national team in the first round of the world championship held in England in 1966. After that decision, of course, the foreigners who had already arrived in Italy remained to play. In the summer of 1980, when the borders reopened, Fiorentina bought Argentina winger Daniel Ricardo Bertoni from Sevilla, world champion with his country’s national team in 1978. Bertoni, among other things, scored a goal in the Buenos Aires final. Aires won in extra time by Argentina over the Netherlands 3-1. 1980, as written, is also an important year for Fiorentina. The company, in fact, passed into the hands of the Pontello family, who have the great ambition to bring the purple team back to the Olympus of Italian football. The Pontellos are entrepreneurs engaged in the construction sector. Ranieri, the eldest son of Count Flavio, becomes president of Fiorentina and is the youngest president of Serie A. But 1980 (when the final phase of the European championship is hosted for the second time by our country) for Italian football is also a sad year. In fact, in the spring, in the days when the splendid exhibitions dedicated to the Medici are inaugurated in Florence, he is involved in the bad story of football betting with some players arrested at the end of the matches. At the conclusion of the investigations, Milan and Lazio were relegated to Serie B at the end of the 1979/80 championship. Avellino, Bologna and Perugia, on the other hand, begin the 1980/81 Serie A championship with a five-point penalty at a time when victory is rewarded with two and not three points. In addition, several players are disqualified, others are disqualified (there will be an amnesty after Italy’s victory in the 1982 world championship in Spain). The most famous are Paolo Rossi, Enrico Albertosi, Bruno Giordano, Lionello Manfredonia, Giuseppe Savoldi, Giuseppe Wilson, Mauro Della Martira, Franco Cordova but also Claudio Merlo and Guido Magherini who play in Serie B. 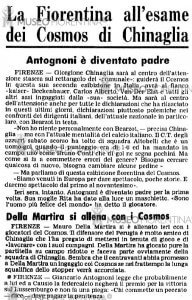 Returning to the match on October 15, I immediately realize that there are not many people at the stadium, when I arrive in the Marathon, half an hour before the start of the match between Fiorentina and Cosmos on a not particularly cold autumn evening. Friendly matches, albeit luxurious, never attract too many spectators during the current championship. And the great champions lined up by the Cosmos are still in the downward phase of their career. I do not care. It is fantastic for those who love football to have the opportunity to see Beckenbauer live but also Carlos Alberto, former captain of Brazil who were world champions in 1970. The former Lazio and Italian national team center forward Giorgio Chinaglia also plays in the Cosmos. 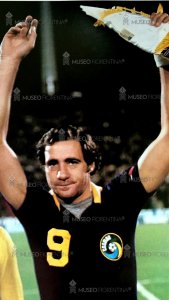 The match is an important test for Fiorentina, coached for the third year by Paolo Carosi. The championship stopped three days earlier for the national team match in Luxembourg (valid for qualifying for the 1982 world championship) won (on 11 October) by Bearzot’s blues 2-0 thanks to goals from Collovati and Bettega. During that match, among other things, Causio and the Luxembourg player Schreiner were expelled for mutual misconduct and Fiorentina captain Giancarlo Antognoni in the 89th minute for a reaction foul. Only four days of that 1980/81 championship were played. Fiorentina are second in the standings, together with Catanzaro and Inter, one point behind Roma and are still unbeaten. He won in Florence with Perugia and in Avellino and drew at home with Catanzaro and in Udine, in the last game played before the break. Four days after the meeting with the Cosmos in Florence, Eugenio Bersellini’s Inter, future Viola coach, and reigning Italian champion, is expected for a match between the two runners-up in the class. Carosi for this challenge against the New York club sends the following formation: Galli (Pellicanò from 60 ‘); Manzo, Tendi; Galbiati, Guerrini, Casagrande (Orlandini from 66 ‘); Restelli (Novellino II from 71 ‘), Sacchetti, Desolati (Fattori from 60’), Antognoni, Bertoni. 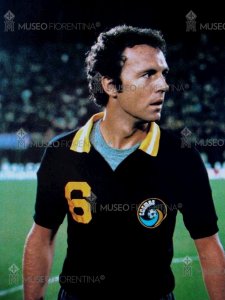 Of course, the most anticipated player of the match is Beckenbauer. The champion from Munich, on the pitch with the number six shirt, plays free. At thirty-five he still gives flashes of class. The game vision is the usual one, with delicious touches of the ball and kisses for the teammates. He runs less than in the golden years of his career. But the class is not water and it remains innate to all ages. The game is played at a slow pace and this certainly favors him. When you see a player making even three or four champion plays like the “kaiser”, this is enough to gladly pay the ticket price. This is a special evening for Fiorentina captain Giancarlo Antognoni who one day became a father. But still he and his wife Rita did not decide on the name of the child, later called Alessandro. Giancarlo celebrates the birth of his first child, creating a network for the Cosmos. The match between Fiorentina and Cosmos, although played at a slow pace, is enjoyable. There aren’t particular tactics and the scoring actions are numerous and follow each other continuously. Of course, as always, I watch the Viola players carefully but also Beckenbauer. Fiorentina started well and after four minutes took the lead with a goal from Casagrande.  At 17’Desolati doubles and at 19′ Antognoni signs the 3-0 goal. Beckenbauer does what he can, because his defensive teammates leave a lot to be desired. But the “kaiser” stands out when setting the maneuver. Chinaglia shortens the distance with a penalty in the 25th minute. He at Fiorentina, as Lazio center forward, at the Stadio Comunale in Florence scored two goals in the matches of the 1973/74 championship (when the biancocelesti won their first championship) and 1974/75 (in this one the Viola scored it Antognoni), both finished 1-1. The first half of this match between Fiorentina and Cosmos ends with Carosi’s team leading 3-1. In the second half, Galbiati scored on 19 ‘, and 18-year-old Sauro Fattori, who took over from Desolati, on 25’. 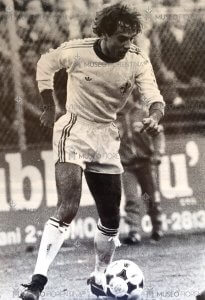 The Cosmos make up for it with goals from Durgan in the 28 ‘and Chlnaglla in the 32’. At 5-3 for the viola, Fattori still thinks, at the last minute, to sign the goal of the final 6-3. I leave the stadium satisfied. I saw a Fiorentina on the ball and one of the strongest players in the world delighting us with some splendid plays. Beckenbauer, even at thirty-five, can still make a difference. And, in fact, the following year he won the West German championship with Hamburg. 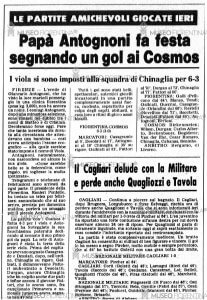 More than forty years after the match between Fiorentina and Cosmos, some reflections on the protagonists and not only on that meeting seem necessary. Giancarlo Antognoni was one of Fiorentina’s most authoritative managers. Franz Beckenbauer is honorary president of Bayern Munich and he was already so on 9 March 2010 when Fiorentina, despite beating Bayern 3-2 in the second leg of the Champions League round of 16, played their last match in the top continental competition ( because it is deleted). The little boy Sauro Fattori, who became an adult, became the first coach of the Fiorentina Women to win the first women’s Scudetto of the purple team on May 6, 2017 (on the same day in which Bernardini’s Fiorentina in 1956 graduated as Italian champions , drawing 1-1 in Trieste with Triestina with a goal from Julinho), beating Tavagnacco at the Franchi stadium, in front of over eight thousand people, 2-0 with goals from Caccamo and Bonetti. Last but not least, for almost two years, Fiorentina and Cosmos New York have had the same owner, Rocco Commisso.