Almost all the stars of world football have played at the stadium in Florence, the current Artemio Franchi, the first municipal denominator and before that Giovanni Berta. Some of these champions wore the Fiorentina shirt, others were Fiorentina’s opponents in the Italian league or in the Italian Cup, or in official or friendly matches at an international level. Still others have been in Florence with their respective national teams in matches against the Italian one. Some, then, performed at the Florence stadium during the 1934 and 1990 world championships and during the 1968 European championships, organized at Franchi). I was lucky enough to see several of these world football champions live, including Oleg Blochin. 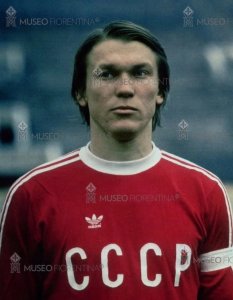 The first time I see Blochin he is in a friendly match between Fiorentina and Dinamo Kiev played on November 13, 1977. I have already witnessed, in the Fiesole curve, a match between the two teams on Wednesday November 26, 1969. It is the race return of the round of 16 of the Champions Cup ended 0-0 which qualifies Fiorentina to the quarter-finals thanks to a 2-1 first leg win with goals from Chiarugi and Maraschi. Then the seventeen-year-old Blochin who is part of the squad, however, does not play.

I will see Dynamo Kiev live two more times in official matches. Wednesday 22 November 1989 at the Renato Curi stadium in Perugia, where Fiorentina plays the home games of the Uefa Cup, Bruno Giorgi’s viola, in the first leg match of the round of 16, win 1-0 against Lobanosky’s team thanks to a penalty converted by Baggio (with the 0-0 in the return to Kiev the Viola team qualified for the quarter-finals). On Thursday 23 April 2015 at the Franchi stadium, instead, Fiorentina will face Dynamo Kiev in the second leg of the quarter-finals of the Europa League. After the 1-1 first leg, Montella’s team wins 2-0 thanks to goals from Gomez and Vargas and qualifies for the semifinals.

After this long interlude on the official matches between the two teams, return to the match between Fiorentina and Dynamo Kiev led by Valerij Lobanovsky, which takes place at the Comunale Stadium in Florence on Sunday 13 November 1977, during the championship break three days before the match. qualification for the 1978 World Cup that Bearzot’s national team will play at Wembley against England (the Azzurri lose 2-0 but qualify anyway). It rains but it is not too cold considering the season, when I arrive in the Marathon about ten minutes before the start of the match (at 2.30 pm). At the time, however, large umbrellas could also be brought to the stands to shelter from the rain. There are few people, because the friendly matches, during the season, attract little public, even if in the ranks of Dynamo Kiev plays Blochin who just two years earlier won the Ballon d’Or. In the end, the paying spectators are less than five thousand.

The match between the two teams is held as part of the “Ukraine Week” events (Ukraine is one of the republics of the Soviet Union and will only become an independent state in 1991) which takes place in Florence, to celebrate ten years of twinning between the most beautiful city in the world (such is Florence for me) and Kiev. For this meeting with Dynamo Kiev, which for about ten days has conquered the title of champion of the Soviet Union for the ninth time, the viola coach Carletto Mazzone must do without Antognoni, engaged with the national team but also with the full-back left Rossinelli and stopper (one of today’s two central defenders) Della Martira. The Roman coach fielded this formation: Carmignani; Tendi, Zuccheri (Di Gennaro from 69 ‘); Pellegrini, Galdiolo (Marchi from 69 ‘), Orlandini (Braglia from 64’); Case (Casarsa from 46 ‘), Gola, Prati, Sacchetti, Desolati (Sella from 81’). 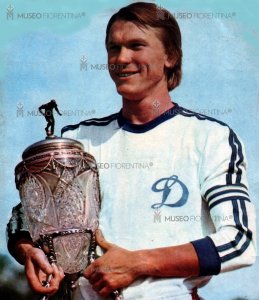 In the first half Dynamo Kiev dominated the match and, on a couple of occasions, Blochin devoured the goal just a stone’s throw from Carmignani’s goal. The Soviet number eleven shows off his immense class, with some plays as a true champion. His speed is impressive as well as the dribbles in the strait that put the Viola defenders in difficulty several times. Also, on a couple of occasions, he shoots on goal. But, fortunately for Fiorentina, that day his conclusions, usually precise, ended up. However, Fiorentina has the best chance of the match thanks to a penalty kick awarded by referee Lapi for a foul by Bessonov on Desolati. Prati goes on the spot but his shot is central and the Soviet goalkeeper Jurkovsky deflects the ball in a corner kick. The first half ends with the result of zero to zero. In the second half, however, Dynamo Kiev started strong immediately and, after a minute, Losinsky with a great shot from thirty meters gave the Soviet team the advantage. Fiorentina feel the blow and in the 5 ‘suffer the second goal. The action sets it up by Losinsky. On his pass Blochin with a header provided a perfect assist for Kolotov who, with an empty net, beat Carmignani. Mazzone’s team, even with many young players on the field, reacts and on 20 ‘with Desolati, the best of the Viola, shortens the distance. The number eleven Viola discards three opponents and scores a eurogol from the right winger. The two numbers eleven, Blochin and Desolati, receive open applause from the public of the Comunale In the finale Mazzone makes other changes. The Roman coach, with the team fighting not to be relegated (in the seven championship days played, Fiorentina has not yet won a match; they drew three and lost four), thinks about the match of the following Sunday at the Stadio Comunale with Vicenza by Paolo Rossi (the viola will lose 3-1). Dinamo Kiev limited themselves to controlling the match but, two minutes from the end, they still hit the mark thanks to Berezinoi who beat Carmignani with a low shot. The match ends here, with Dynamo Kiev 3-1 victory. However, I leave the stage satisfied. Despite the absence of their most important player, Giancarlo Antognoni, Fiorentina stood up to the champions of the Soviet Union. Blochin, one of the strongest players in the world at the time, showed great plays that really thrilled me. I hope to see him live again. My hope becomes reality seven years after that rainy November afternoon. 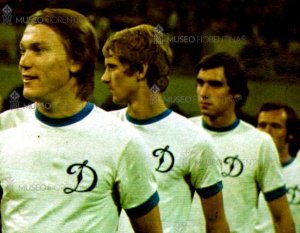 The second time I see Blochin live he is still in a friendly match played at the Stadio Comunale in Florence between Fiorentina and Lobanovsky’s Dinamo Kiev, during the championship stop for the match that Bearzot’s national team played the day before in Pescara against Poland (blue success 2-0 with goals from Altobelli and former viola Di Gennaro). When on Sunday 9 December 1984 I enter the stadium a quarter of an hour before the start of the match (scheduled for 2.30 pm) there are few people in the stands. The spectators at the end are less than five thousand. Very few, considering that in the ranks of the opponents there is a “golden ball”, or Blochin. But the fans’ thoughts turn rather to the match against Juventus that will play in Florence the following week. It is a beautiful sunny day and the weather is acceptable, considering that it is December. In Maratona, from where I watch the match, it’s really good. In Fiorentina there are many absent. Galli, Contratto, Socrates, Pulici are missing as well as Antognoni who, unfortunately, will miss the entire championship. The Viola coach Giancarlo De Sisti sends the following formation onto the field: Paolo Conti; Gentile, Carobbi (Moz from 46 ‘, Olivari from 72’); Oriali, Pin (Pascucci from 73 ‘), Passarella; Massaro (Monelli from 46 ‘), Bortolazzi, Cecconi, Pecci (Occhipinti from 46’), Pasquale Iachini (Labardi from 73 ‘). Among the bench the only one not to play even a minute is the seventeen-year-old goalkeeper Mareggini. In Dynamo Kiev with the number eleven shirt there is of course Oleg Blochin. The game starts immediately at a high pace, imposed by the Soviet formation. After four minutes Blochin takes a corner kick. The parable is perfect and Kussnetsov with a header scores the 1-0 goal. Blochin moves a lot, starting from the left. Then, however, when he squeezes in the center he immediately goes to the shot. Gentile, designated by De Sisti to his marking, suffers. At 19 ‘, Blochin sprints on the offside and beats Conti out. It is the 2-0 network. Fiorentina is in a doll and is unable to react. The first half does not offer other particular emotions but the difference in the technical rate between the two teams is truly remarkable. The pressure of Dynamo Kiev is suffocating and when the pace of the game is up for the Viola they are painful. Fiorentina are missing too many starters against a team that has among its ranks a true champion like Blochin who at thirty-two is still able to make a difference. At the beginning of the second half De Sisti begins to think about the match against Juventus and leaves Pecci, Massaro and Carobbi in the changing rooms. The technical gap between the two teams is still growing. Dynamo Kiev in the 9th minute drops the trio with a header from Stevuscenko.

The small audience present in the stands begins to grumble. The whistles also rain. Not on my part, though, because I have never whistled or will whistle whoever wears the Viola shirt. However, I understand the anger and concern of the people for the future of the team that started at the beginning of the season, with high-ranking ambitions (after the signings of Socrates and Gentile), unfortunately not respected by the results. Blochin continues to put on the show. It never stands still. Give a series of dribbles and cheering shots. At 26 ‘, on a corner beaten by him, Pin slips Conti. It is the goal, or rather the own goal, of 4-0. Fiorentina gives up completely. Dinamo Kiev, on the other hand, have fun and enjoy themselves and at 40 ‘, after a personal action, Blochin scores the 5-0 goal. It is an authentic sight to see it. The whistles rain when the game is over, while the players go back to the locker room with their heads down. Losing 5-0, even in a friendly, is never nice. As I walk along Viale dei Mille to return home, I think back to the race I have just seen. I admired a stratospheric player like Blochin, who scored a brace and two assists that resulted in a goal and an own goal. At the same time I am very worried about the fate of Fiorentina just a week away from the match against Juve. Of course I don’t really imagine that in two days De Sisti, the captain of the team that won the second championship and the coach who touched the third, would have been sacked. There will be no Picchio (who had been operated on for a cyst that compressed his brain at the end of August and was still not well), on the purple bench, on the day of the match with Juventus (which will end 0-0) but Ferruccio Valcareggi.