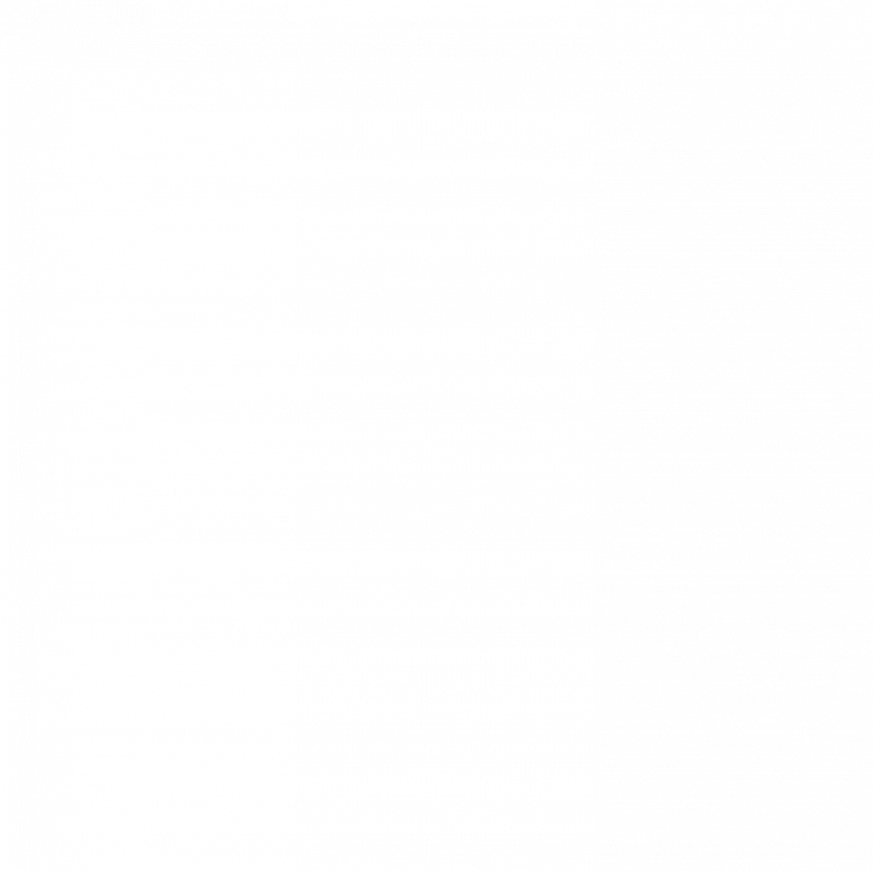 Generation after generation, the Viola passion leads to follow Fiorentina even away from home. We open this column with three travel stories, written by Alessandro Giannetti, Stefano Borgi and Niccolò Russo, which we present in chronological order. Three stories of different times, but united by the intensity of emotions and feelings.

We left at dawn, by bus, half sleepy and with a freshly printed newspaper under one arm (La Nazione or Stadio, and if someone showed up with the “rosea” they seriously risked being left at home).

The travel luggage included a transistor radio (to listen – obviously – All football minute by minute), some tokens to call home (you were fourteen, alone or with a friend of the same age around the world), some magazine for longer trips (especially Tex), drinks to taste and the inevitable survival sandwiches (from ham to fried cutlets, passing through omelettes, mortadella, fennel and assorted salami), which caring and loving mothers had delivered, greeting you like a soldier leaving for the front: “Please, eat them all!”

During the sleepy outward journey tickets for the stadium were distributed: but sometimes they were bought directly on the spot, in a common box office, and it was also possible to discover – like that time in Vicenza on April 8, 1979 – that up to 14 years the entrance was free. 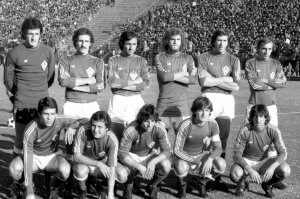 We arrived on site well before the opening of the gates, which we anxiously awaited in front of them, sometimes managing to greet some of our heroes on the other side of the bars (I remember the gigantic and very kind Galdiolo, known as Badile in Verona).

We therefore entered the stadium at least two hours, or even more, before the start of the match: a very long time, which was mostly spent discussing training and eating sandwiches. We also sang, of course: stadium choirs, to create atmosphere.

The matches were often not memorable shows, but if you came out the winner, perhaps with a goal in the last minutes (like that time in Vicenza, with the only goal in Serie A by that Luciano Venturini from Empoli, or that other in Bologna, with Birillo Orlandini’s head on Antonio’s magical cross), the return trip was a pleasure. 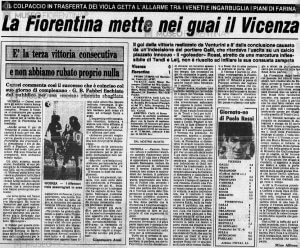 You would return to Florence in the dark, with your father waiting for you patiently in Piazza Stazione, near the Police station. The wait for the never sufficiently thanked parent could also be very long (the expected return time of the bus was always very approximate) and once the soldier on guard approached him to investigate what he was doing at that time of night in front of the station, with equivocal beard and circumspect air (we were, after all, in the years of lead).

– I’m waiting for those returning from the Fiorentina match …

The policeman looked at him halfway between disgust and contempt. And my father thought he must be, unquestionably, a hunchback.

PISA-FIORENTINA IS WELL WORTH A MASS…

Two hundred meters. Just two hundred meters. This, more or less, is the distance between Piazza dei Miracoli and the Garibaldi Arena. Stadium that, only in 2001, will be co-titled to the famous president of Pisa Romeo Anconetani. And in those two hundred meters joy, passion, fear were consumed … and joy again, when (now safe and sound) I got on the bus that would take me back to Florence. But let’s go in order: it is April 27, 1986, the last league game is played, Aldo Agroppi’s Fiorentina are fourth on a par with Inter and Turin. Seven days earlier he had beaten Udinese at home with a goal from Antognoni. By head. The third in his fortnightly Viola career. Only for this reason a heritage that was not lost. 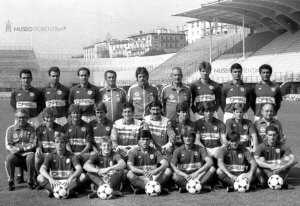 On the other hand, Pisa, coached by a former viola like Vincenzo Guerini, floundered third from bottom in the standings: over Bari, under Udinese. It was reasonable to understand that day was worth not only the Uefa qualification or the stay in Serie A, it was worth the regional supremacy, the honor, the pride, the dignity … it was worth a lot. Maybe too much. Fiorentina in typical formation: Galli in goal, Contratto and Gentile full-backs, Pin and Passarella central defenders. Three median line with Nicola Berti on the right, Massaro on the left, Oriali in the middle. Antognoni in the position of attacking midfielder behind the strikers Monelli and Iorio. A 4-3-1-2 in the offensive phase, 4-4-2 in the defensive one. As the Italianists taught, as Aldo Agroppi taught.

First aside: Agroppi, despite a promotion in 1982 at the helm of the Nerazzurri, faced those who were historical rivals, being from Piombino. And a book could already be written on this. Secondly: Fiorentina that day fielded Giovanni Galli and Daniele Massaro already sold to Milan, Daniel Passarella sold to Inter. And yet … Let’s go back briefly to the undersigned that he had made all his trips: Turin, Milan, Verona, Genoa, even Udine … Do you want Pisa to be missing?

The easiest, the most reachable. Although, given the rivalry, the premises were not very reassuring. Everyone knew, everyone thought of a foregone conclusion: the values ​​on the pitch were too different, it was said. But you know, the derby (even if only from Tuscany) is a level, it cancels the distances, and as the good ones say … it escapes all predictions. 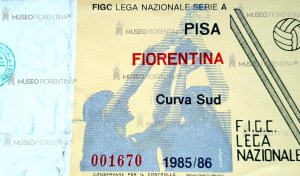 The ticket of match Pisa-Fiorentina season 1985-86.

The game went through a very linear story: pouring rain, slippery ground, first time of study and then shooting all the cartridges in the second. Meanwhile, Torino won over Verona, Inter drew with Sampdoria, in short … the Uefa qualification was hanging by a thread. All the more so when at 63 ‘Ciro Muro shoots from outside the area and, due to the slippery ground mentioned above, the ball (perhaps deflected) mockingly splashes on the ground and ends up in the net. Pisa 1 Fiorentina 0.

At that point the Nerazzurri would be safe and the Viola out of Europe. But no one had come to terms with the professionalism of Daniel Passarella, who was world champion. 180 seconds pass, Nicolino Berti enters the area and takes a disputed penalty: he kicks the “caudillo” and it is a sentence. Another ten minutes, Berti still forces Cavallo to foul from the edge of the area: he kicks Passarella again and it is the second sentence. The definitive one. Pisa 1, Fiorentina 2, Viola in the Uefa cup, Nerazzurri in Serie B. Third and last part: it is worth remembering how those two goals brought the Argentine champion’s final loot to 11, a record that (for the defenders) will last for several years to come.

In the meantime, Inter equalized and was out of Europe, with many greetings to the “biscuits” and cakes made in Italy. One last image: Giovanni Galli running under the curve, throwing his shirt and starting to cry. In his Pisa 9 years of Viola militancy ended (in addition to the many others in the youth sector), Berlusconi’s Milan awaits him, the titles, the cups, but as they say … the heart is not commanded. Meanwhile, 5.45 pm has struck, the referee Pieri from Genoa (remember? The one from Catanzaro) whistles the end and the adventure begins for the unsuspecting fan. 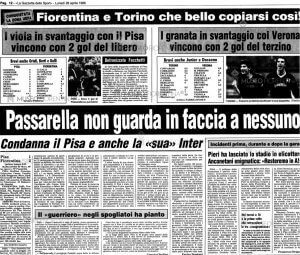 A few meters away and there is immediately the charge of the Pisan ultras, poisoned, angry, the police batons fly like tennis balls, boys with shattered noses who fall bleeding at my feet. I scared more of them. When suddenly, new Mennea, the saving intuition of running those two hundred meters at breakneck speed and locking myself up in the Cathedral, where in the meantime Mass was being celebrated at 6pm. Stuff not to be believed: at 6:45 pm Piazza dei Miracoli was empty (a miracle, in fact) with the return bus scheduled for 7 pm. At 8 pm I was at home, as if nothing had happened: from the Hell of scuffles to the Paradise of the home. And while I’m waiting for Domenica Sprint, I hear my mother say: “You will be hungry, what do you want for dinner?”

“Come on Nicco, come along too!

None of us, so far, have ever won in Rome … it’s the right opportunity.

You will see that every sacrifice will be repaid … we will remember it for our whole life! “

Adrenaline and prophecy in one phone call: how could I say no to the “Divine”?

Yes, because Simone is not only an indisputable purple heart from Rivolta d’Adda and a dear friend of mine from Curva Fiesole; for some years now, in fact, he has been known to most people with this sublime nickname.

I, at the time, did not know it yet, but I was still willing to trust blindly: this and more for a miracle at the Olimpico.

On the program there was the return against the Giallorossi in the “Italian derby” of the round of 16 of the Europa League: the unfortunate 1-1 in Florence left no room for great optimism (in light of our precedents in Rome), but none of us he was going to let go … Mirko in the first place.

Mirko is the “guarantor” of our trips: if there are problems in terms of schedules and organization, he always takes care of solving everything.

For example, I really had them, considering the short time interval between my exit from work (13.30 a little more) and the start of the match (19.00): the fact is that, to my great surprise, I reached the stands of the guests close to the starting whistle, despite the copious delay of the shuttle bus arranged for the Fiorentina fans from the hamlet of Saxa Rubra. 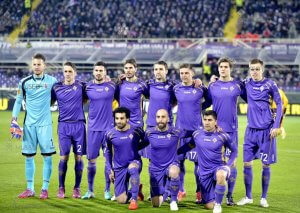 Penalty by Gonzalo Rodriguez under the Romanist Curva Sud.

Doubling of Marcos Alonso on the colossal naivety of the Giallorossi goalkeeper Skorupski.

The Ultras of Rome, in response, even left the stadium in protest.

All in just 21 minutes of play!

In short: a divine evening to say the least.

Thanks to the team and my friends, of course… but not only that.

In the remainder of the race, in fact, I often looked towards the entrance of our sector to attend an infinite historical walk: that of Paolo Righetti.

For that special occasion, Paolo, the purple soul of Desenzano del Garda, had been entrusted with the banners of the “Alterati Viola Firenze nel Nord” (led by the legendary and omnipresent “Barattistuta”): a delay on the schedule, however, it had barely prevented him from seeing Fiorentina’s first goal.

Paolo was on the stairs at that moment.

An ordinary person would have joined his travel companions to cheer with them; he, on the other hand, decided to take a nice walk with the flags on his shoulder in the space in front of the bar … a superstitious gesture that lasted until the final whistle of the referee!

That day, in a nutshell, Paolo Righetti sacrificed holidays, money and a thousand kilometers of travel in the name of a crazy dream for the Viola.

In light of what has happened, therefore, we can only thank him from the heart.