We begin the publication of the cards dedicated to the team and to the players of Fiorentina who have accompanied their history. We will present a wide and varied panorama, trying to be as complete and precise as possible. We therefore ask not only for understanding, but also, from those interested, for direct help with information and material, by writing to: info@museofiorentina.it

The cards appeared at the end of the nineteenth century as small lithographs to be given as a gift to the buyers of a product. It was the French warehouses Au Bon Marché that had this idea which was immediately very successful and was copied by other companies, especially in the confectionery sectors. In the United States and England, however, cigarette manufacturers used this new form of advertising.

At the beginning the subjects were more of an artistic type, then, also for the use of photographic images, famous people began to arrive. The encounter with sport, which was being born and spreading at the same time, could not be missed. So here comes the champions of boxing, cycling, athletics, baseball in the United States and football in England too.

In Italy, sports cards begin to circulate after the First World War; they are in small size, depict sports champions including many footballers and mainly distributed by chocolate-producing industries. In the second post-war period, with the birth of special companies, numerous series of stickers, sporting and not, with or without albums, were produced, which were remarkably successful. At the beginning of the 1960s Panini entered the market and revolutionized the way of making albums and above all the distribution system. This will lead the company to assume a primary role not only in Italy, but also worldwide. In the meantime, football has increasingly established itself as a global sport and therefore as the main subject of the various collections published by it.

Through the stickers, this small game has been fun for generations of children and a collector’s item for others and which today is a reason for study and research, we will try to retrace the history of Fiorentina.

In the 1920s began the production and distribution of sports cards, including for footballers. It is above all confectionery companies such as Zaini, Davit and others that use them as a promotional means. But cards are also distributed by pencil manufacturers and magazines such as the “Guerin Sportivo”. The first known cards of Fiorentina are from 1928-29 and throughout the ‘30s its most significant samples will be represented in the various series issued.

Fiorentina participates in the National Division championship, the team still plays with the red and white shirt.

These are the cards of goalkeeper Mario Sernagiotto and striker Angelo Pilati. 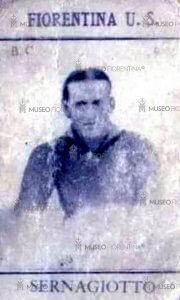 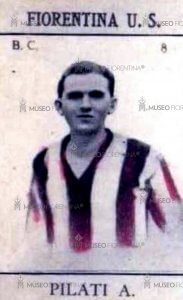 The Publisher, unknown, makes a mistake in the header, calling U.S. (Unione Sportiva) Fiorentina, while the correct name was the Associazione Fiorentina del Calcio. The team participated in the National Division championship, group B, the so-called “adjustment” championship necessary, by virtue of the placement, for the creation of the Serie A and Serie B which had their baptism in 1929-30.

Fiorentina, who finished second in group D of the First Division (Lega Sud), had failed to qualify for the National Division championship, but the FIGC, at the end of June, expanded the number of participants from 24 to 32.

“In the next season 32 teams will participate in the National Division championship, who will play in two groups of 16 each … Deadline the registration will be on 10 July. Based on  the registrations received, the Federal Directory will establish the groups and consequently fix the various teams to be promoted. However, we can so far inform you that eight more teams will enter the National Division than expected following political as well as sporting criteria in the choice. In addition to the 24 that are already entitled, the following teams will therefore go to the highest category: Hellas, Reggiana, Triestina (regardless of the place it occupies in the standings, but in homage to the other titles of the noble Trieste), Fiorentina, Legnano , the Milanese, Venice and Prato, taking into account that the Tuscan town has 155 registered players… ”resolution of the FIGC, reported by“ La Stampa ” on june 29, 1928.

Fiorentina failed to set up a competitive team and paid heavily for the novitiate, finishing last in their group: a negative experience, but decisive for building the team that quickly became one of the protagonists of Italian football.