We continue the publication of the cards dedicated to the team and to the players of Fiorentina who have accompanied their history. We therefore ask not only for understanding, but also, from those interested, for direct help with information and material, by writing to: info@museofiorentina.it

The great demobilization continues, with the sale of six owners: Baggiani is promoted in goal after the sale of Ugo Amoretti, who moved to Juventus together with Scagliotti; Bigogno and Perazzolo are sold to Genoa, while Gringa and Neri go to Lucchese together with the promising striker Romagnoli. Mario Pizziolo had to surrender to injuries by playing only one game, his last in Fiorentina, after seven years in which he had been a great protagonist. The championship ends in ninth place in the standings. 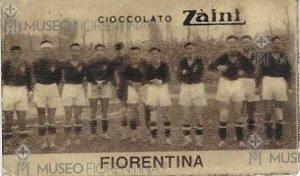 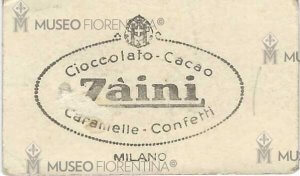 Together with the Zaini (dimensions 3.5×6.5) we find other producers: the Caffarel Prochet Chocolate of Turin (3.7×7 cm). 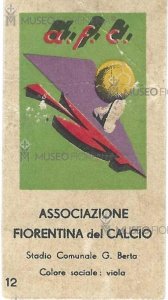 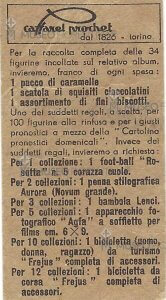 Here the center forward Vinicio Viani II in a card of the Bagnaschi Cioccolato of Cremona (3×5 cm). 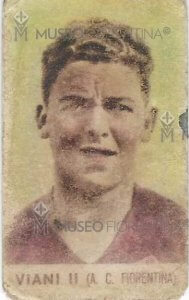 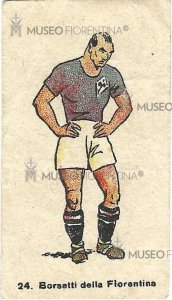 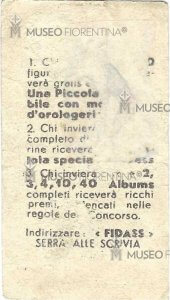 Fiorentina relegated to Serie B. It is the result of a long economic crisis. This is the explanation given by Ottavio Baccani who in that season also had to coach the team: “the financial vicissitudes bring to this championship a very small Fiorentina, shadow of the brilliant team of 1933-36 both for the many departures and for the mediocrity of the new signings. The poverty of the cadres does not allow the viola to save themselves from relegation”. Here are depicted in two colored stickers of the Zaini two of the most significant purple players: captain Lorenzo Gazzari and striker Vinicio Viani II. 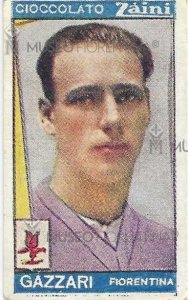 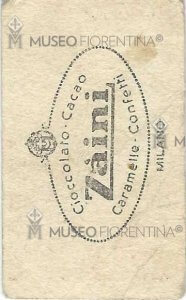 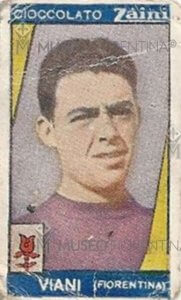 Fiorentina wins the championship and returns to Serie A. Ridolfi has managed to set up a good team, with this basic line-up Griffanti, Piccardi, Magli, Cuffersin, Poggi, Michelini, Menti, Grolli, Di Benedetti, Celoria and Tagliasacchi. In pink the young Innocenti, Pini, Paris, Benelli, Paoletti and Mannelli and the elderly Poggi I, Gazzari, Bortolini and Vecchi. Right winger Romeo Menti takes over. 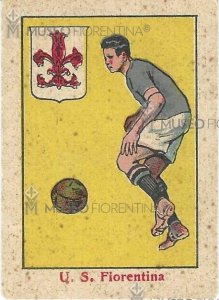 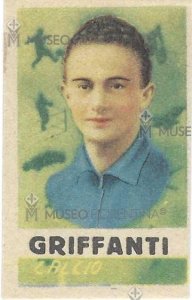 These are two unknown editions. The first, dimensions 3.7×5.3 cm, with a typical mistake: calling Fiorentina Unione Sportiva and not Associazione Calcio. The second, dedicated to the goalkeeper Griffanti, with a 3×5 cm format.

Back in Serie A, Fiorentina managed to save themselves thanks to the best goal quotient. The Viola finished on equal points with Napoli and Liguria (a team that relegated together with Modena last in the standings). Galluzzi took over the bench in the middle of the championship and with him the Viola adopted the “system” (WM), the English game that Ridolfi and Baccani had long wanted to experience in the Italian championship. At the end of the season the first trophy arrived with the victory of the 1940 Italian Cup. 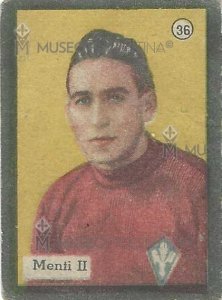 This is the card dedicated to the strongest player who wore the Viola jersey, a true champion, the right winger Romeo Menti published by the newspaper “Il Balilla”, Giornale per Ragazzi, which gave the cards as a tribute.