Massimo Orlando becomes fifty, today May 26, for most of the nineties (126 appearances) one of the crucial points of Cecchi Gori’s Fiorentina, between great moments, defeats, extraordinary exploits, immense hopes and even bitter disappointments.

We began to hear about him at the end of the Eighties when, in the chase of rumors that were now given to a team from the north Roberto Baggio, it turned out that at the bottom of Italy, in Serie B, in Reggina, there was a young number 10 with incredible numbers who first with Nevio Scala and then with Bolchi, was amazing the cadeteria and who could have been of interest to Fiorentina. 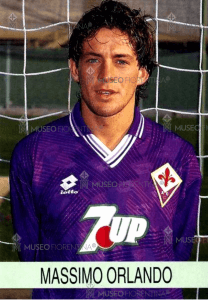 Life is strange, because the billionaire Juve that Montezemolo was about to entrust to Maifredi, in addition to Baggio also bought the young Massimo Orlando from Reggina, after he had followed him for a long time. And right in the retreat at Villa Perosa, it was Robertino who began to tell the very young playmaker, from Veneto like him, how much a future talent could find in Florence the opportunities to assert himself and become a potential champion. Having said that, in the October repair market, the Fiorentina of the new president Mario Cecchi Gori, devoid of real talents and orphan of Baggino, had Orlando come from Juve, first on loan, then definitively with a substantial billionaire outlay.

Orlando was the first real big purchase of the Cecchi Gori; the greatest hope and at the same time the most painful regret. And so it was that the Fiorentina fans, in that gloomy autumn of 1990, found the unexpected way to fall in love and return to hope in the construction of a great champion, because Massimo had no half measures: he made his debut at the stadium on November 11 1990, against Genoa, replacing Di Chiara in the 63rd minute.

A few minutes of adjustment, then personal action on the left, two men jumped, a big left-footed and the ball diagonally in the corner, followed by a run under the crazy Fiesole and just for him. “Better than Baggio, Orlando better than Baggio …” was the chorus that followed in the following days from the curve and in fact the boy, in his first year, did really remarkable things: eight goals (many for a nineteen year old), several assists, an exponential growth in the second round. Orlando had nothing to do with Baggio, but not because he didn’t have the potential to be a champion, but because of his way of playing: very little attacking midfielder, very almost total midfielder: great running, extraordinary accelerations, enormous physical endurance, alongside to a true talent in playing with his head held high, in always serving his unmarked partner and also in high-precision left-handed shooting. 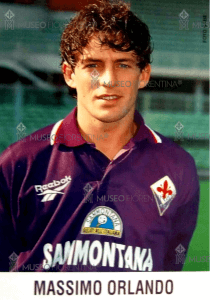 A number 10, it was said at the time, that could be a big 8, a modern mezzala in short, at a time when in European football the attacking midfielders no longer existed and therefore either you became a second striker (as did Baggio) or you became a midfielder who he finished, but in the same way he ran and came back. Orlando had an anomalous way of playing even for a left-handed talent in midfield, because instead of starting from the right to return and find the shot, he loved starting from the far left, always returning to look for the ball on the ground for the assist, the central pocket. or enter, with great speed inside the opponent’s area. But he also loved the tackle, he was courageous in tackling the opponent, who often fouled over the edge, out of generosity, meeting the inevitable referee intervention.

Alongside his talent, many also realized his fragile character: he fell for a short time, sometimes only for a low grade from a journalist, he became absent, or controversial, or still unwilling to improve.

The high point of his career, but also the beginning of his problems, was concentrated in the 1992-93 championship: that year, in a team all made up, from number 6 upwards, with extraordinary talents, Massimo found a fundamental position in the field, that of pure left winger, in the 4-4-2 in the area of ​​Gigi Radice, a module in which he ran a lot, very generous and tireless, starting from the band to exchange with Bati or Baiano, becoming almost unmarkable, but also representing a great point of balance. 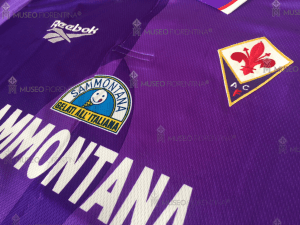 In the moment that the team collapsed after the expulsion of the Coach, Massimo remained at high levels, making hardly any matches wrong and becoming one of the few certainties in a group that instead collapsed, among a thousand problems, from all sides. When Fiorentina were relegated on the last day, among players who didn’t have a problem, he, in love with his curve and his people, had a huge emotional breakdown; he accepted to go without problems to make the B, where for two thirds of the championship he also did very well, but at that point he found himself in front of a great coach who unfortunately found it difficult to bear him.

With Claudio Ranieri there were many problems to the point that it was decided, on his return to Serie A, to send him, by now quite depressed, to Capello’s Milan for a year to make him relaunch. He almost never played at San Siro, but in the summer of 1995, back in Florence in a team of very high hopes, everyone seemed to see a new boy, full of desire to do and start again: it didn’t matter if he was in that team. ‘were already Rui Costa and Robbiati, because in any case Massimo’s qualities would have married well in that group refurbished by Ranieri; he scored a great goal in Naples and finally, on 29 October, on the eighth matchday with Bari in Florence, he returned to the owner, alongside Bati, Rui, and Ciccio, to the delight of the fans and Vittorio Cecchi Gori, who has always been in love with him. He started very well in that match, but fate was waiting for him: at minute 25, entering as he always did in a slide on an opponent, he severely severed the ligaments of the knee, going towards an ordeal that lasted, physically, even long after his return. 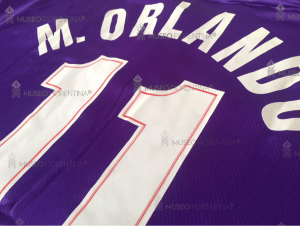 He had time to play as a starter in the first Italian Cup Final and then rejoice in the splendid night of May 18, 1996, but his career was unfortunately at the end. Few appearances the following year, even less in Bergamo, where he went in 1997, until the decision, amid a thousand physical problems, to retire from football at the age of 28.

He could have played anywhere: in bigger teams than Fiorentina, in the national team, abroad; it could have split the world and for many games it seemed to succeed. But go find out how bad luck, fragility, bad luck, sometimes affect the very best. Thanks Massimo himself, with you on the pitch, to shoot, jump, finish, rail against opponents and referees, winning was really more beautiful.