After only one year in Serie B, Fiorentina, winning the 1938-39 championship, returned to Serie A. The relegation had only one cause: the economic difficulties that crushed the Marquis Ridolfi. The financial crisis had forced to sell the best players every year, replacing them with young people. In Serie B the team was revolutionized, among the important signings (Griffanti, the Poggi brothers, Celoria) that of Romeo “Meo” Menti, striker taken from Vicenza and destined to leave an important mark in Italian football, stood out.

In the 1939-40 championship, Fiorentina left with the aim of consolidating their presence in Serie A, using the team that had won the promotion as a basis. Two important players who had established themselves with the purple jersey (Giuseppe Bigogno and Arrigo Morselli) returned and the team was strengthened with the arrival of the midfielder Ellena, Antona, an eclectic midfielder sold by Ambrosiana-Inter, and of promising young people including the Vicenza midfielder Armando Frigo, born in the United States. On the bench was confirmed the Austrian Rudolf Soutschek (support center who arrived in Italy at the end of his career and became a coach, as well as a wine producer in Monferrato).

After the opening match, three consecutive defeats nailed Fiorentina to the last place, alone, in the standings. The specter of a new relegation took possession of a team that also appeared very unfortunate: the injuries of Menti (six goals in the first nine days and nine in the whole championship) and Poggi II made everything much more complicated. Disastrous the matches away, in the first round seven defeats in seven games. The home performance kept the lilies afloat. On the first day of the second round, Fiorentina collapsed in Genoa in the middle of the second half, conceding three goals in fifteen minutes, a 3-0 no appeal with the team nailed to the third last place in the standings.

The day after Ridolfi decided to replace Soutschek, announced as temporary, “as coach Soutschek is currently ill”. Fiorentina replaced the Austrian coach with Giuseppe Galluzzi, glory of Florentine football, first in the Sports Club and then in the purple ranks. The former viola player had returned to club after leading Pontedera, working with the youth teams in close contact with the technical director Ottavio Baccani. Galluzzi managed to save Fiorentina and remained at the helm of the team until the conclusion of the 1942-43 tournament, the last one before the end of the war.

The regulation of the time set as a criterion, in case of finishing on equal points, the best goal quotient. Fiorentina (0.770) had him clearly more positive than the other teams finished at 24 points: Napoli (0.634) and, above all, Liguria (0.568) who relegated together with Modena, who finished last at 22 points. Fiorentina, in a 16-team championship, scored 22 of the 24 points at home, capturing only two away draws, both in Rome. 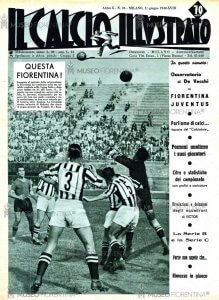 The Italian Cup was organized by the Directorate of Higher Divisions, the FIGC body responsible for managing national competitions (Serie A, B, C). At the time, the 1922 edition (the year of the division of the Soccer League) won by Vado was not included in the Golden Roll. The event had been organized in the 1926-27 season, but was interrupted (with the round of 32 in progress) due to the lack of dates in which to play the matches.

In 1935-36 it was again organized to complement the championship, based on the single round, with a tournament centered on the direct elimination system. All the Serie A, B and C teams participated in the Italian Cup. A first elimination system was carried out (started on 3 September 1939) which involved, in a distinct form, all the teams of C and some of B to arrive at the selection of 32 clubs that met in the third elimination round. At sixteen qualified teams joined the Serie A. The pairing of the round of 32 were decided by drawing lots, applying the English model: it was possible, from the round of 32, a direct clash between clubs from the top division.

The formula of the tournament was the one-off match, with reversed-field replays in the event of a tie after extra time.

Easy debut for the Viola team that plays at home against a Serie C team. The Polisportiva Manlio Cavagnaro is none other than the Sestrese (company from Sestri Ponente, green jersey with white star at heart level) on which it was imposed, in 1937, to change the name to honor a local fascist who died in 1921. The game has no history, after twenty minutes the Viola are already ahead 3-0. The final score is reached, with four goals from Penzo and a hat-trick from Antona. despite a second time at a small trot, played to avoid raging on the weak opponent.

(on February 15, 1939, Milan, which had already changed its name from Milan Football Club to Milan Associazione Sportiva, completed the Italianization of the name into Associazione Calcio Milano).

In the break in the championship, after the 25th matchday, two teams with different moods meet. Milan (o) with the victory over Napoli (3-0) took a decisive step to avoid getting involved in the fight to avoid relegation, while Fiorentina, defeated (0-3) at home by Ambrosiana Inter, keeps only one point of advantage over the penultimate Neapolitans in the standings.

Offensive sterility is the leitmotif of the match, unlocked by the Rossoneri thanks to a disputed penalty. Fiorentina drew almost immediately, with Antona on a cross from Morisco. The two hours of play passed under the banner of boredom: “For long stretches, he made sure to hit the ball as hard as possible to raise it like a candle,” writes “Il Corriere della Sera” in his chronicle. The best in the field is Griffanti who, after a difficult start to the championship, is redeeming himself. The goalkeeper pulls out some decisive interventions, giving Fiorentina the opportunity to play the repetition of the match in Florence.

It is played on Saturday, with the championship stopped due to the commitment of the national team which on Sunday 14 will play in Rome against Romania (2-1). The round success was a consequence of the injury to goalkeeper Zorzan. In the quarter of an hour, the AC Milan goalkeeper threw himself between Morisco’s feet, remaining bruised in the face and head. Zorzan had to leave the camp and transported to the Hospital of Santa Maria Nuova. Left wing Biraghi went into the goal. As the minutes went by, Fiorentina accentuated their pressure, seizing the advantage at the end of the first half. Without history the recovery, the viola are rampant against an opponent who pulls the oars in the boat. These are the scorers: 43 ‘Morisco, 48’ Celoria, 60 ‘and 70’ Baldini, 89 ‘Antona. The conditions of the AC Milan goalkeeper considered out of danger were positive.

Serie A stops for two Sundays, in preparation for Italy-Germany on May 5th. The draw gives the Viola team the advantage of the field. Lazio, fourth in the league, are one of the two teams, together with Ambrosiana Inter, to have conquered the field of Florence. He shows up with Piola in the middle of the attack and, on paper, is favored over the unsafe Fiorentina.

The verdict of the field goes in a completely different direction. The gigliati re-propose, with Pasin in place of Poggi II, the formation used against Milan (o). Confirmed the strange attack with Morisco right wing, midfielder Celoria center forward and Baldini, excellent shooter, left inside. It could not have gone better for the offensive department: Baldini scored twice, Morisco scored again as against the Rossoneri, and a goal from Celoria who, due to his characteristics, is a distributor of the game and not a top man. Baldini impresses everyone with his verve and the power of his shot, but also with his ability to do the right thing when he has the ball at his feet.

The clear defeat is explained by the lily aggression contrasted with the lack of initiative of the Lazio attacking game, so as to give Fiorentina wide field. Scorers: 12 ‘Celoria, 31’ Vettraino, 35 ‘Baldini, 50’ Morisco, 78 ‘Baldini

At the end of the championship, on the day when Fausto Coppi, the youngest of the cyclists in the race, wins his first Giro d’Italia, the semifinal between Viola and Bianconeri is played in Florence. Fiorentina, still rewarded by the draw for the home factor, have put aside the anxieties that have gripped them throughout the championship and … are beginning to believe in it. The bianconeri, with the world champion Umberto Caligaris on the bench, finished third in Serie A, closing the championship in crescendo. In the Cup, Juventus eliminated Biellese (0-3), defeated Roma (3-1) and beat Brescia (3-0).

“Having escaped the danger of relegation, Fiorentina continued their admirable conduct in the Coppa Italia and after inflicting a 4-1 on Lazio, they … repeated with an even more solid squadron, Juventus, eliminating them by a sharp 3-0. Scorers: 61 ‘and 77’ Celoria, 81 ‘Baldini. With a similar behavior, the viola will constitute a very serious obstacle for Genoa, another finalist” (“Il Calcio Illustrato” n. 24/1940).

“Fiorentina will have to do with Genoa in the final. It will be a confrontation of great technical interest, now that Genoa has readjusted the system: a confrontation, in fact, between systems engineers, who in the present conditions cannot have a favorite, given the great vitality of the viola. 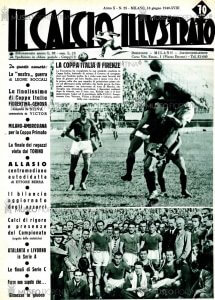 Florence had already been the seat of the final of the 1936-37 edition won by Genoa over Rome. The final is played on the first Sunday of the war, a fact that increases and does not diminish the importance of the event. On the same day, the federal directorate is convened at the Excelsior hotel in Florence, precisely to decide on the management of national football during the conflict. The final of the Italian Cup is preceded by that of the boys’ championship between Lazio and Turin – the grenades win 3-0. 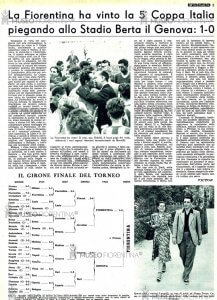 THE ITALIAN CUP IN FLORENCE

Fiorentina completed their admirable conduct in the Italian Cup, beating Genoa by measure and thus awarding themselves the coveted trophy. If the Viola were favored by playing in their Stadium, it is no less true that it is the first time that a top-level team has managed to establish itself in the far from easy test … Fiorentina won the V Coppa Italia, succeeding four big teams such as Turin, Genoa, Juventus and Ambrosiana. This is therefore the first time, in five years, that the Cup has been awarded to a team that is not popular (Victor, “Il calcio illustrated” no. 25/1940).

The delivery of the Cup, in the presence of Vittorio Pozzo, marks the arrival point of Ridolfi’s Fiorentina: the purple team enters the Golden List of national competitions.

These are the teams that took the field for the final